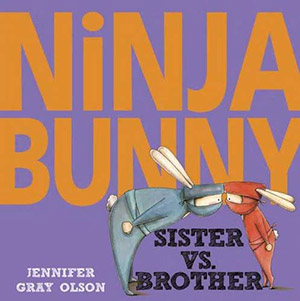 Ninja Bunny is back! This time, he and his ninja friends are after the Golden Carrot of Awesomeness, a giant carrot that won a prize at the county fair. But Ninja Bunny’s little sister wants to come too, much to his chagrin. She tags along as he and his friends raid Mr. McGregor’s farm. The carrot patch is full of snarly vines that defeat the older boy bunnies… but will Little Sister be sneaky and ninja-like enough to steal the giant carrot?

Author and illustrator Olson’s first Ninja Bunny book was hilarious, charming, and had illustrations full of character, and this book follows proudly in the original’s footsteps. The little details in the art make the characters come alive, and the ninja buddies are often doing funny things in the background of scenes. The book is action-packed, and the art depicts the action and the humor adeptly.

While the original Ninja Bunny book was more of the eponymous bunny’s solo quest to become a ninja, this book fleshes out his family life and his friendships. His relationship with his little sister is relatable – what older sibling hasn’t been annoyed at a younger one’s constant “me too, me too!” and been told by their mom, “just play with your sister, dear.” Like the previous book, this one makes it clear that Ninja Bunny is a kid, with a kid’s sense of imaginative play, and childlike thought processes, which makes him all the more endearing – and that goes double for his little sister.

This is also a fantastic girl-power story – it turns out that little girls can also be super-awesome ninjas. Kids will love the funny rabbit antics and the ninja action, but they will also learn about sibling cooperation and that girls can do anything they want to, including play with the boys and maybe even beat them at their own games. I look forward to seeing what else Ninja Bunny and his plucky little sister will do.