No Knives in the Kitchens of This City by Khaled Khalifa, translated by Leri Price 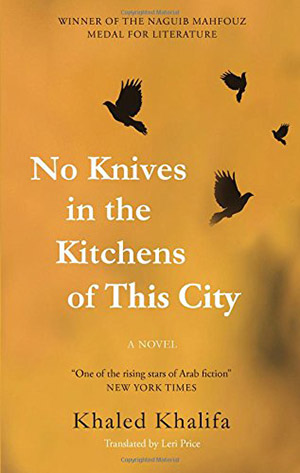 Khaled Khalifa’s No Knives in the Kitchens of This City is a beautiful and gut wrenching multi-generational novel centered on the time of the rise of the Ba’athist party regime in Aleppo. The destruction that the party inflicts on Syria is seen through the lives of the principal characters in the city of Aleppo, which arguably functions as the novel’s central character. No Knives in the Kitchens of This City won the Naguib Mahfouz medal for literature, which is no surprise and it is deserving of such distinction.

Kalifa focuses the majority of the novel on those who would not ordinarily figure centrally in Arabic fiction. Nizar, the narrator’s uncle, is a gay man who goes through much travail because of his sexuality. His nephew narrates by telling us of his imprisonment for sodomy by the regime and the gut-wrenching pages that follow this are stark, real, and haunting. Nizir’s return to society, after the terrible ordeal of his imprisonment, brings us a fuller picture of what it means to bear the full weight of a regime. His struggles to deal with the pain of the totalitarian state are incredible and viscerally rendered here.

A large portion of the novel is centered around the narrator’s sister and Nizir’s niece, Sawson, who transcend the stereotypical Arab woman. We get a fully human and humanized individual in Sawson. She is a whole character stuck between two worlds. At once, attracted to the power of the Party and at the same appalled by it; Sawson has affairs with men who find themselves at both ends of the polarity dividing the society. Sawson gets sucked into it all and becomes our eyes as we navigate through the intricacies of a rapidly changing Aleppo.

The book is complex in this way and throughout one feels as if they are reading a Faulknerian text about Syria. We get all of the ins and outs in crisp telling detail of individuals and a family through decade after decade of a society’s decline.

No Knives in the Kitchens of This City offers us two very important perspectives that are hard to find when it comes to the Syrian conflict. There is that of the Syrian here which is a complete human. We don’t see the people of this text as refugees, but as citizens living their everyday lives. Second is the view of life under a party regime that goes beyond the borders of Syria. We get a first-hand glimpse of the shift towards totalitarianism in slow and subtle detail.

Aleppo physically and socially decays around the characters in No Knives, and Khalifa uses this decay to symbolize the impact of the regime on the society. Negative changes happen casually and throughout. Mold pervades spaces. People are swooped up, imprisoned. Earned degrees from universities are casually put in decaying drawers, as they no longer bear weight in the society. Devastations feel absolutely real on these pages because they are not overdrawn and that is the total strength of this text.

The novel is a vast and powerful one that just comes in over two hundred pages. Sentence after sentence astonishes as we are brought face to face with these individuals struggling in Syria. The importance of this novel for a non-Syrian audience is to give real emotion and humanity to a situation that many don’t understand and that too many people in the world are apt to dismiss as simply a Muslim “refugees” crisis.

No Knives in the Kitchens of This City is an important and at times overwhelming read. Khalifa’s text perfectly creates a space for us to think about the scope and weight of history in the lives of individuals and how those people in far off places are just that: people.