That Hidden Road: a Memoir by Rocco Versaci 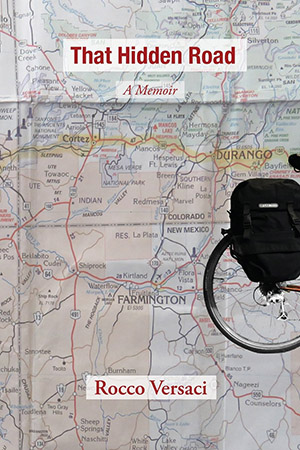 In 2010, some time after his marriage turned into a divorce, Rocco Versaci set out on a road trip. Not any old road trip, but a bicycle ride across the United States. He was not a long-distance biker prior to his decision; it sounded like a fun challenge to him. He researched bikes and bought one he liked, naming it Rusty. He planned his route and his trip began in San Diego with a set goal of a certain number of miles each day. That Hidden Road: a Memoir is Versaci’s account of his trip, not only across the country, but also through his life. Interspersed with his descriptions of his travels are descriptions of how his life reached the point where he was out on this trek, skipping around through his childhood, college, and marriage, as well as stories about his sons and about the lives of his parents. Along the way in his journey, he meets an assortment of characters who help him out, give him needed or unneeded advice or simply sit with him for awhile. All of their stories add to and blend in with his.

Versaci’s writing style is open and accessible. His personal stories flash with tempered honesty as suggested by the title of his second chapter, “Mistah Secrets,” rich with images of his planned and unplanned deceptions. Descriptive of the events and his part in them, these stories are never bogged down in apologies, bragging, or platitudes. He also interweaves the history and geography of the territory through which he is traveling. That Hidden Road: a Memoir is a wonderful mix of personal history, travelogue, adventure, and reflection. It flows at a comfortable pace from one story to the next, peppered with subtle humor.