The Best of BC by Johnny Hart 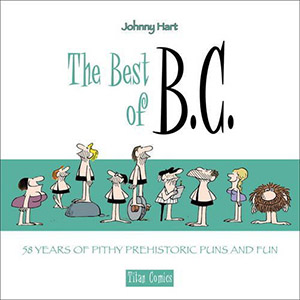 In 1958 the comic strip B.C. appeared in national daily newspapers. Johnny Hart created the strip and he continued it for the next 58 years until his death in 2007. Since then the strip continues through the efforts of his oldest grandson and others.

In the week-day newspaper is a section either read immediately or savored after reading the sports page and other bits of news: the comics, aka the funny page. In Saturday’s and Sunday’s paper each comic strip is longer, at times extending over 1/2 a newspaper page! For those individuals unfamiliar with B.C., it is a comic strip set in “caveman” era. There are many with some references to the then current era of the published strip. It is a strip that makes you smile, laugh, and at times think a bit deeper. The lead character is BC, a kind and pleasant male. He and his compatriots Thor, Peter, Curls, Wiley, Clumsy Carp, and a thing named Grog explore and learn about their world. There are two women, the Fat Broad and the Cute Chick who have much to teach them. The supporting cast is 5 primary “animals,” the Snake, the Anteater, John the turtle, Dookie Bird, the Apteryx, in addition to the Dinosaur, ants, and others.

This book is structured with selections of comic strips sampling each decade from the 1950s into the 2000s. If you had the opportunity to have read any of this comic in the past, this book will bring back pleasant memories as well as show the development and growth of the series. The strips tend to be standalone with a single joke, pun, or gag. There is use of simple conversation with absurdity, irony, subtly, occasional verse, and the visual images bringing about the humor. An example: Peter is pointing at two lines in the sand and asks BC, “Why do you think parallel lines never meet?” BC answers, “ Nobody ever introduced them.” Another: the Cute Chick and the Fat Broad are sitting on rocks in a cave. Cute Chick asks “What’s that?” and Fat Broad replies, “ A walnut,” to which Cute Chick asks, “ What’s it doing on the floor?”

Beginning in the mid-to-late 1980s Johnny Hart introduced social, political, and religious observations into the comic, which continued and increased until his death. These comics at times evoked objections as to their content and presentation. To the credit of the editors of this book they do not shy away from presenting some of the milder controversial strips. Overall the book is very entertaining and will evoke much joy at revisiting these characters. This is a book one might want to keep on the coffee table to share with others.