The Gilded Chalet: Off-piste in Literary Switzerland by Padraig Rooney 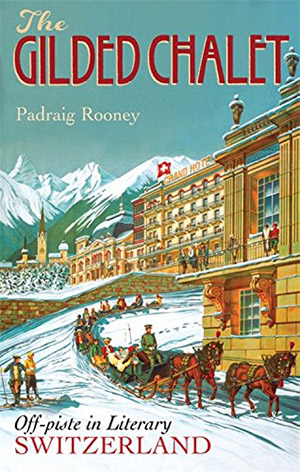 Like a box of Swiss chocolates, this book is filled with rich, quality bonbons for readers, writers and (otherwise) fans of Switzerland. The Gilded Chalet: Off-piste in Literary Switzerland is a tour de force of good writing, with insightful historical and literary facts and commentary about the lives and works of many of the last two century’s best authors. It is entertaining, very readable and full of the sorts of personal anecdotes, some a bit racy, that you’ll want to share with others.

The book’s author, Irish born Padraig Rooney, is a long-time Swiss-based travel writer, poet, and teacher of English (at International School Basel). In this literary-historical overview, Rooney escorts us through the Alpine chalets and hotels, health spas or sanatoriums, down slopes and across lakes, meeting writers and learning how they loved and lived, entertained themselves, and wrote masterpieces as time allowed. There are a lot of gemstones buried along the way, like the meaning of ‘Alp.’ It’s related to ‘elf’, a type of mountain vampire that induces Alpträumen (nightmares), apparently out of which writerly genius arises.

Virtually every genre is covered. Horror, for example, came to the fore in Mary Godwin Shelley’s Frankenstein (1818), written in Switzerland while husband Percy Bysshe Shelley wrote romantic poetry in the company of his friend George Gordon (Lord) Byron, “the literary lion of the age.” It is Percy and Byron, who spent their early adulthood in the Alps, from whom “Our romantic notion of Swiss mountain landscape derives.”

Travel writing also took to the road from here, with Geneva-born ethnologist, Ella Maillart, and others. Maillart, for example, rode and wrote in the front seat of The Cruel Way: Switzerland to Afghanistan in a Ford (1939). Some travel-writers also penned famous novels; and conversely, some famous novelists doubled as travel-writers. Besides Treasure Island (1883), for example, Robert Louis Stevenson wrote Essays on Travel (1905), which included ‘The Stimulation of the Alps,’ ‘Alpine Diversions,’ and ‘Davos in Winter.’ And, between Alpine skiing and climbing, Arthur Conan Doyle published travel stories from Switzerland in The Strand magazine, where he also serialized the far more well known adventures of Sherlock Holmes. Switzerland figures prominently, for example, in his novel The Final Problem (1893) where, tired of writing about the clever sleuth, Conan Doyle attempted (literarily) to kill Sherlock off in a fall from Reichenbach Falls. The clamor from his readers was so loud (by ostensibly finishing the adventure series) that after a few years he resurrected Holmes in The Hound of the Baskervilles (serialized in 1901-02), followed by many more.

While Switzerland attracted many international authors, Rooney also discusses local born authors. Ella Maillart, mentioned above, is well covered. And an entire chapter is dedicated to Swiss-born Friedrich Dürrenmatt, who produced the Inspector Barlach mysteries: The Judge and His Hangman (1950) and Suspicion (1951); and others.

Some of the world’s best espionage writing also took off in Switzerland. John le Carré (David Cornwell), who wrote The Spy Who Came In from the Cold (1961) and other great tales, as well as short stories and screen plays, brings his youthful experiences while attending a private Swiss academy and his time at the University of Bern into his plots. During the Cold War, Bern was an international crossroads for both spies and writers, and it was there that Cornwell was recruited into the British secret service. His books, written under the nom de plume ‘le Carré,’ are full of recollections of posh schools, grand hotels, and sundry wheelings and dealings on the Swiss scene:

“Many of the foreign writers in this book saw Switzerland as a haven – from two world wars in the twentieth century, from tax and celebrity towards its end. And not just writers: glitterati, rock aristocracy, royal and imperial has-beens, oily billionaires, anybody seeking the quiet slopes after life’s fitful fever. Wealth helped, as it always does…. Celebrity comes into the mix too….”

And in this grand study, Rooney focuses on all character types, both the writers and the written about.

Padraig Rooney’s Gilded Chalet entertains, informs and whets the appetite for more. And there are more discoveries in Rooney’s tasty assortment of literary bonbons.