The Girl from The Savoy: A Novel by Hazel Gaynor 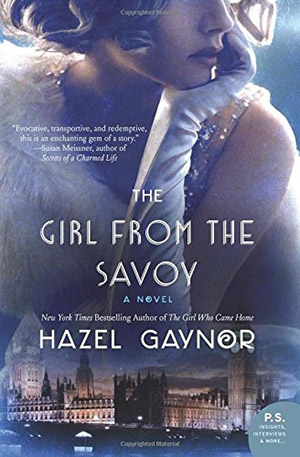 Dorothy Lane, “Dolly for short,” has traded in her position as a maid-of-all-work out in the country to work as a maid at The Savoy. The glitter and glam of the hotel and its clients is exciting, and while she enjoys her new position, she secretly longs for more. The life of the stage calls to her, and she dreams of one day being seen, of being in the spotlight herself. Working at The Savoy may give her the break she needs as a chance encounter with her idol, Loretta May, opens the door.

“I think about the endless line of girls outside the Pavilion Theatre. Everyone who makes it needs a bit of luck along the way. Maybe this little piece of paper is mine.”

The Girl from The Savoy is an enchanting historical novel with memorable characters and a setting that is replete with its own life. Taking place in England after the Great War, all of the characters are suffering with varying degrees of personal loss, and this sorrow haunts the background of the book and the actions the characters take. The point of view switches between Dolly (the hopeful maid), Loretta (London’s queen of the theatre), and Teddy (Dolly’s one time beloved who was injured in the war). Each of the viewpoints offer a different and complimentary perspective and weave together to spin a wonderful story.

Along with the day-to-day life of a maid at The Savoy, the book touches on many daily tragedies including depression, rape, death, petty feuds, and the varying lengths that people are willing to go to protect the ones they love. Told around the backdrop of The Savoy, which becomes a character in its own right, The Girl from The Savoy will quickly draw you in and keep you up reading late into the night. This isn’t a happily-ever-after fairy tale, nor is it a story where all dreams come true. Instead readers are offered a glimpse into a world of everyday miracles, of the little joys and the tough decisions faced by everyone, no matter their background or upbringing.