The Secrets of Hexbridge Castle by Gabrielle Kent 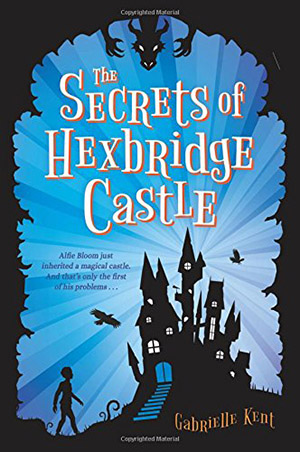 Gabrielle Kent’s The Secrets of Hexbridge Castle is a page turning, middle grade adventure and fantasy novel with layers of mystery, history, mythology, and time travel. It follows an eleven-year-old boy named Alfie, whose father is an inventor of unique and not always functioning items, his mother had passed away and he lives a dull life where he feels isolated and alone most of the time. Alfie Bloom’s life changes the day he slips through time during a car accident that could have killed him. After, he receives an invitation sent by Muninn and Bone Solicitors to claim a sizable inheritance from Orin Hopcraft, a mysterious man his father finally realizes is not the dream he once thought he was. His inheritance is a castle in the village of Hexbridge (where his mother was from) and a talisman. Once he moves into his new home he starts at his new school, investigates mysteries surrounding Orin Hopcraft, the sealed door in the basement of his castle, missing livestock, and a murdered neighbor surface. With the two headmistresses at his new school dealing out ridiculous and cruel punishments as well as trying to catch the rustler who is stealing from his cousin’s farm, concern grows about someone wanting to unlock what has been hidden for centuries under Hexbridge Castle.

This novel is told through the third person point of view. Alfie’s perspective greatly shows his character development as he matures from an isolated kid who does not take any risks to bravely trying to save his friends and family. His relationship with his cousins is entertaining as they attempt to understand the strange and magical occurrences surrounding the castle. Their loyalty and friendship is a great aspect of the novel as well as the developing relationship between Alfie and his father, which improves once they move to the castle. The importance of family is present through the novel, which gives motivation for many of Aflie’s actions as he focuses on protecting his family and friends.

The setting and world building is detailed and imaginative, taking the reader along for an adventurous ride. This novel is filled with many similes; descriptions and imagery that relate to the senses to fully make the reader feel a part of the story. There are whistles that awaken rooms filled with magic, a bearskin rug that speaks and flies, Halloween themed village festivals, shape shifters, dragons, and people who possess a power over magic. Each letter Alfie receives from Orin Hopcraft leads him to uncover another mystery about the castle that he inherited. The middle school adds to the setting by creating a harsh environment so that most of the students come together to help each other out with each punishment given by the despised and feared headmistresses. School bullying, which is a present problem, is also addressed in this novel at both of the schools Alfie attended, where the bravery and courage he discovers helps him overcome those problems. There is a bit of exploration between two different time periods: six hundred years ago and the present day, which is the majority of the novel.

Trust, magical corruption, and abuse of power are themes displayed throughout this novel. Alfie quickly learns that not everyone can be trusted and some that he did not trust come through for him in the end. There are a few twists that may be predictable for older readers, however it is still an enjoyable story.

The Secrets of Hexbridge Castle is recommended for readers who enjoy whimsical and fantastical tales of adventure, mystery and time travel with strong friendships, brave characters, and those who enjoy and miss the world of Harry Potter.