The Spy by Paulo Coelho 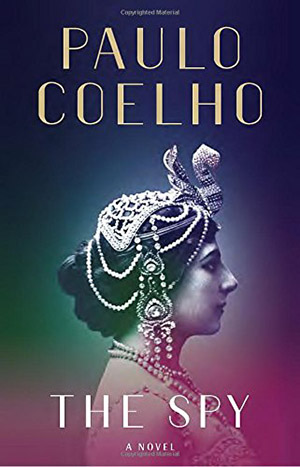 Paulo Coelho gives us a fictionalized account of Mata Hari, the accused spy and famous dutch exotic dancer, in his new aptly titled book The Spy. Hari has been the subject of film, biography, documentary, and mythic lore. Coelho takes a turn at her and the results is a boring cursory study of the character that drags in spite of being short.

The book starts with an omniscient opening that has Hari in France facing the firing squad. The opening frames what makes up the bulk of the novel, which is written in the form of a letter by Hari to her lawyer and once lover Edouard Clunet as she awaits her execution. All of the action is up front, and the execution meant possibly to frame the story as tragic, leaves little at stake for the rest of the narrative.

The story is made up of short chapters that capture scenes in Hari’s life as told by her. A rape as a young girl, her marriage to the brute Dutch Colonial Army Captain Rudolf MacLeod, her love of dance, and her subsequent rise to fame in Paris as a lauded exotic dancer. All of these are done in small scenes, which at first kind of work because many of them zip with strength based on their succinct details and tone.

But the book begins to unravel the further you read. Coelho’s text is full of lame lines that attempt to be profound and instead fall flat. They come in the form of asides by Hari or as advice given from characters Hari meets. She says, for instance, about someone that “he failed to understand that dance is a poem, one where each movement represents a word.” This at first seems like it is meaningful, but on further inspection means little to nothing.

The new age sentiment on display in line after line is one that Coelho is famous for, his book The Alchemist sold over 65 million copies and hinged on a self-help-like-tone. But what worked in The Alchemist for Coelho doesn’t translate as a viable style in this book on Hari.

There are ideas said as truths on a variety of topics that strive to read with authority but the professed maxims lack any true substance. Coelho writes so many paragraphs that begin with banal platitudes and end with bad metaphors that it renders this book nearly unreadable.

Coelho also has Hari meet and interact with tons of famous people from her time and all of the names are dropped heavy-handedly. Freud is mentioned but Hari can’t seem to remember his first name. She meets Picasso and he is a wide-eyed impolite man trying to paint her as a way to get her into bed.

The final section of the book comes as the letter written response to Hari from her lawyer lover. The writing in the last section is simple and juvenile without much difference in tone from the Hari section.

In the end, The Spy is a brief dull read that will appeal only to die-hard Coelho fans, lovers of all things Mata Hari, and those who like new age style fiction.