When the Moon Was Ours by Anna-Marie McLemore 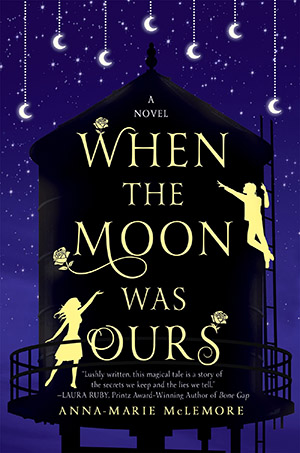 This is the story the people of the town would tell: there was an old water tower, so old it had become a danger, like an old tree ready to topple to the next storm. So the people of the town brought down that water tower like a tree, breaking its supports and letting it break open on the ground, spilling forth stagnant water everywhere. But in the water there was a girl. She looked feral as she gazed at the town people, but one boy approached her, and put his jacket on her, and they became friends.

When the Moon Was Ours by Anna-Marie McLemore tells the story of these two children after they’ve grown into young adults. Samir, the boy who paints the moon on glass and paper globes and hangs them around town, and Miel, the girl who came from water, whose skirt hem is always wet, and who has a rose growing from her arm. It also tells of Miel’s guardian, Aracely, the curandera who heals lovesickness, and of the Bonner girls, four red-haired sisters known as las gringas bonitas, who have the power to take anything and anyone they wish – or at least they did, until the eldest sister went away for several months.

“Someday, he and Miel would be nothing but a fairy tale. When they were gone from this town, no one would remember the exact brown of Miel’s eyes, or the way she spiced recado rojo with cloves, or even that Sam and his mother were Pakistani. At best, they would remember a dark-eyed girl, and a boy whose family had come from somewhere else. They would remember only that Miel and Sam had been called Honey and Moon, a girl and a boy woven into the folklore of this place.

This is the story that mothers would tell their children.”

Anna-Marie McLemore has crafted a story that is magical in both the literal magical realism sense, and in the figurative sense in that McLemore’s wording is artistry, stringing together beautiful sentences that glow like one of Samir’s moons. This novel is the good kind of slow read, where words are savored and sentences are reread to enjoy the lushness of the writing. The journey of the main protagonists reads genuine, raw, and personal. The author draws from the experiences of her own life to give the reader something wonderful – an honest and intimate look into the struggles of the misunderstood and those caught between worlds. The novel also focuses on secrets, the kind of secrets that hurt to share and hurt to acknowledge; the pressure of societal opinion; and the consequences of how we love.

Read this book. Let its surreal beautiful otherworld teach you truths about this one.