Womansword: What Japanese Words Say About Women by Kittredge Cherry 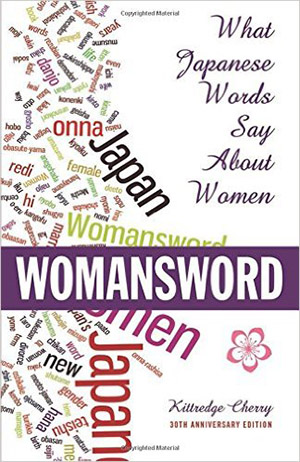 Thirty years ago, Womansword: What Japanese Words Say About Women by Kittredge Cherry was an insightful glimpse into Japanese language and sexism. Cherry breaks down the history and usage of 81 terms, sometimes bringing even more terms into the description. She includes both the phonetic spelling and the Japanese characters, sometimes explaining what the characters mean in relation to how they’re drawn. Through the terms and some of their historical context, readers can get a sense of what it would be like to be female in Japan during the 1980s.

However, a lot has changed since the 1980s. Yet, the only new research for this new edition seems sequestered in the preface. Cherry says that during her research for this new edition, she kept running into the same sources. Perhaps that’s why the statistics and facts are from the 1980s, yet, for example, a quick Google search brings up far more recent divorce statistics. Searches for other categories also bring up more current information. To give a sense of how much has changed in the professional realm during the past 30 years, Japan Times reports, “The number of female workers in Japan increased from 15.48 million in 1985 to 24.36 million in 2014. Women now account for 43 percent of the labor force, up from 36 percent three decades ago.” Instead of updating Womansword with more recent information, the main text doesn’t appear to have been revised since it was first written in the 1980s. The new facts and statistics in the preface should have been woven into the body for context, and more research should have been done to update the book.

In addition to not updating the statistics, Cherry admits in the introduction that some of the terms are now old-fashioned. I can’t help but wonder if I’m reading the equivalent of “dude” and “cowabunga.” Newer, more culturally relevant terms are clearly missing when the body of the book doesn’t have a single word to say about cell phones, tablets, or computers. Where are the harajuku girls that Gwen Stefani sings about? Or Japanese pop stars for that matter? How about the Lolita girls who dress like living dolls or the dozen other types of stylistic girls? How have manga, anime, and video games changed the language and the way females in Japan are viewed?

In the preface, Cherry admits her surprise that no one else has written a more recent version of her book. Nevertheless, this is not a reason to republish something so dated without first updating it with more current and culturally relevant information.