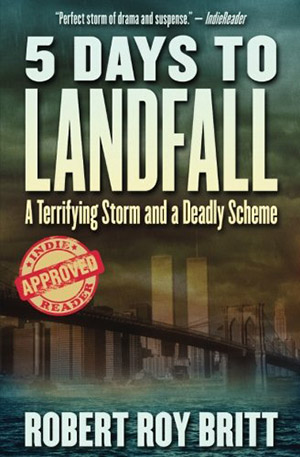 While most of the US is keeping an eye on the eminent arrival of Hurricane Gert, hurricane forecaster Amanda Cole is more concerned about the developing storm, Hurricane Harvey. While the official models show Harvey landing in the Carolinas, the LORAX – a new model still in the testing phase – is predicting landfall in New York. To make matters worse, human greed is inspiring some to ensure the worst damage occurs just to turn a profit. Amanda finds herself trying to convince authorities of the danger, but her own family is directly in the path of the monstrous Category 5 storm.

In 2012 Hurricane Sandy devastated the New York, but it was only a Category 3 storm at its height. Despite dissipating dramatically prior to landfall, the damage to the city was devastating. Robert Roy Britt’s 5 Days to Landfall is a nail-biting thriller, that theorizes a “what if” scenario should a Category 5 storm hit New York.

Despite the sheer amount of technical weather information the book throws at you, it is remarkably easy to understand. The author uses Amanda to break things down into smaller chunks through her explanation to media outlets as well as to her daughter, Sarah. Amanda is the most fleshed out character – given a fairly full backstory through her daughter, her failed marriage, and the “one who got away” – but the rest of the cast is more than able to stand on their own. Surprisingly, the least interesting character is Jack Corbin, weather reporter for The New York Times and love interest for Amanda. While he was very good at channeling the fear he experienced, he seemed a bit tacked on to the story to serve as a romantic subplot and could easily have been more successful as a side character “seen” only through phone calls.

While there is the plot regarding criminal organizations and political corruption to throw a wrench in things, the major agent of conflict in the narrative was one of man vs. nature. Experiencing the violence of a hurricane from the point of view of professional hurricane chasers as well as a few unfortunate souls who happened to be in the path of the storms will keep readers frantically turning pages. While Hurricane Sandy was certainly bad, reading about the potential damage caused by something several times worse is sobering.

Don’t be deterred by the lackluster cover art and a few line editing errors. 5 Days to Landfall mixes touching domestic scenes with page-turning adventure and will keep you up reading late into the night.