America First!: Its History, Culture, and Politics by Bill Kauffman 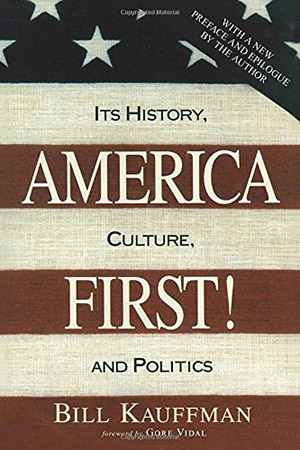 When I selected this book to review, I was prepared to be critical of its chest thumping, manifest destiny promoting, and self-congratulatory tone. I was surprised to discover that this was not what the America First idea is about. It’s seldom that a book actually changes my mind and while America First didn‘t exactly do that, I do have a fresh perspective and respect for their point of view. In addition, I was impressed with Mr. Kauffman’s familiarity with his subjects and interesting narrative. One is led to believe that he was present while it was going on and thus must be at least one hundred years old. In fact, he is only fifty-seven years old, and so my impression must be due to his diligent scholarship and engaging writing style.

Imagine an America of Hootervilles, Petticoat Junctions, and Mayberries. Each one sufficient unto itself, content and prosperous. It fit the times; it suited a country largely agrarian, decentralized and self-sufficient. This is a memory that may be lacking accuracy, in some aspects, but beckons to some people to this day.

Around the turn of the century, the dream started to change, along with the country, due to industrialization, the movement to the cities, and events overseas that led, seemingly inexorably, to frequent foreign wars, militarism, and empire. This is pretty much how things stand today, with the loyal opposition out of favor.

The story is told mostly with short biographies and the writings of impassioned individuals expressing their critique of their present and their vision for the future. Among them are: Hannibal Hamlin Garland, William Soroyan, Charles Lindbergh, both Roosevelts, Patrick Buchanan, and Ron Paul. The Roosevelts, because they loomed large in the erosion of the America First attitude. Pat Buchanan is interesting for the fact that the author, partially at least, rehabilitates Buchanan’s reputation which was, perhaps, shabbily treated by the press and returns him to an America Firster, and not just a fire breathing omniphobe. There are many of them, historic and modern, strange and familiar, but all of them reflecting the style and substance of their time.

This book was first published twenty years ago. It has a new forward by Gore Vidal (1925-2012) and an epilogue by the author bringing it up to the Donald Trump campaign, but prior to the election. This reviewer thinks that the Trump candidacy may be the reason for the re-issue of this book. It’s at least arguable, that now President trump may have populist, of the Original style, America First inclinations that the book and it’s new epilogue: The road to Trump, might expose. If it helps us to decipher President Trump’s somewhat mysterious messaging, it might aid in understanding what’s going on amid the turmoil of the post-election furor and ease some tensions; a worthy endeavor.