Andal: The Autobiography of a Goddess, translated and edited by Priya Sarukkai Chabria and Ravi Shankar 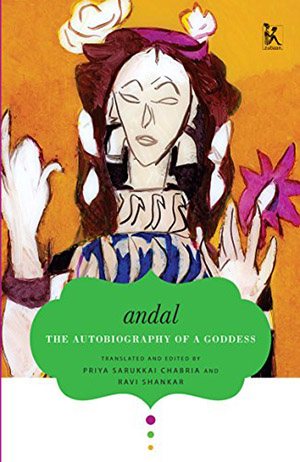 Andal wanted to marry the divine, not in the chaste manner of a nun, but as a love-stricken bride freely giving her entire self body, mind, and soul to her husband on their wedding night and for all of eternity. Andal, born during the ninth century in the southern Indian state of Tamil Nadu, was a mystic poet during her lifetime. Within centuries of her death, she was elevated to the status of a goddess and is still renowned today in India.

Andal’s ecstasy is captured in her 15 hymns published in Andal: The Autobiography of a Goddess translated and edited by Priya Sarukkai Chabria and ‪Ravi Shankar.

“To soothe love’s ache in my round tender breasts I must embrace my lord and perform small services.”

In the introduction, the two translators insist, “Our translations are very much a poet’s translations, rather than a scholar’s.” What they mean is that they’ve intended to capture Andal’s essence and intentions rather than follow a strictly literal exchange of words. However, the introduction itself is a scholarly work as it covers Andal’s background, historical and modern relevance, controversies over authenticity, the construction of Andal’s hymns, the art of translation, and the choices they’ve made as translators.

In addition to the comprehensive introduction, each hymn has a short introduction. Some hymns are translated by one and others are translated individually by both. They chose the most intricate ones to duplicate. Side-by-side, they complement each other well.

The two translators have vastly different styles, which illustrates the complexities of translating Andal. It’s almost by peeking around the edge of an English word or phrase that the reader captures a fleeting glimpse of Andal herself.

Priya Sarukkai Chabria and ‪Ravi Shankar have given the modern English-speaking world a masterful gift from ancient Tamil.