A Boy from the Chesapeake by Larry Roszkowiak 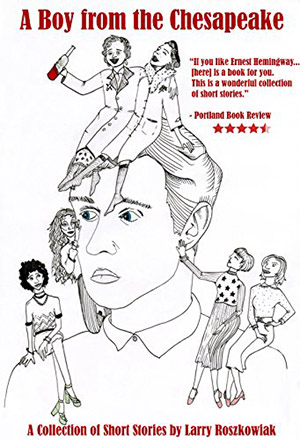 If you like Ernest Hemingway’s “Hills Like White Elephants,” A Boy from the Chesapeake, by Larry Roszkowiak, is a book for you. This is a wonderful collection of short stories. It consists of a little more than 30 pieces (part of them could be called poems) of different lengths. The shortest of them titled “Blame” has only 3 lines and a total of 12 words, and the longest piece is 18 pages long. Most of the stories are dedicated to different women in one man’s life, who is also the narrator, and are frequently titled after the women’s names. You’ll be surprised by the age of the narrator’s first crush and the identity of his so-called “first girlfriend.” You’ll laugh reading about his father’s favorite expression and his brother’s dating rituals. Step by step you’ll figure out the narrator’s age and origin. Following the narrator around the world you’ll know that he served in Navy and went through Cambodia and Vietnam where he met some of his girls. You’ll learn what book started his obsession with literature, and which girl is “accountable” for him becoming a playwright.

Despite the fact that the stories are connected by one narrator and focused on significant and memorable moments in his life, every one of them is a great literary piece by itself and could stand alone outside of this collection. While the entire book could be read in one sitting, it may be more pleasurable to stop from time to time in order to digest all the details and enjoy the author’s striking writing, original metaphors, and allusions. Although the book is defined as a general fiction, its structure allows considering this collection as a fictionalized memoir. Without saying much about the narrator, the author creates a strong and realistic character of him. Through the narrator’s very male point of view on all described events, you won’t feel bitterness in him, but instead nostalgic yearning for youth and perhaps for stability. For something he can count on, like tracks, as he writes in one of the poems “I like tracks…/ Wherever they go, they’re always fifty-six and a half inches apart. / You can count on tracks.” However, the narrator also likes dimes, suggesting that there are other stories in his pocket. Therefore, the train may continue moving.