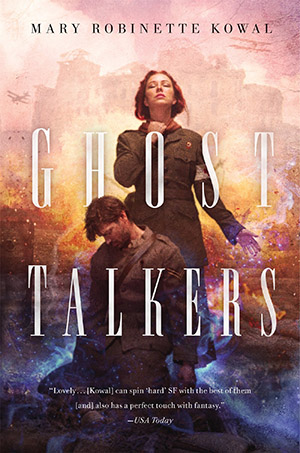 Ghost Talkers is a novel set in an alternate version of World War I. When British soldiers die at the front, they “report in” and give any details about the enemy or their death that they can to mediums, who report this information to the army to use as intelligence and help defeat the enemy. One of these mediums is Ginger Stuveysant, daughter of a wealthy American family with ties to England. When her wealthy and aristocratic fiancé reports in to one of her séances, she finds that he has not died as a result of the war, but was murdered, likely as a result of his intelligence work. This starts Ginger on a crusade to find out who murdered her fiancé, with the help of his ghost.

Mary Robinette Kowal is an accomplished author of several other novels and many short stories, as well as an accomplished puppeteer, and this diversity of her background clearly comes through in her writing. She deftly aligns her alternate universe with our historical one, and there is clearly care taken in the background research, particularly in small details. However, none of this detracts from Ginger’s story, which is filled with drama and will keep readers on the edges of their chairs. Each of the characters (and Kowal works hard to include a diverse cast) is fully realized and seems like a true human being with realistic character flaws and faults, but you can’t help rooting for them even when happy endings seem far out of reach. Overall, this book will appeal to readers of fantasy and historical fiction as the natural audience, however, the tight plot and well-crafted characters will also bring in readers who tend to read more general fiction.