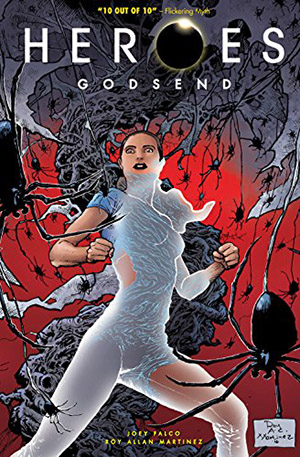 For anyone familiar with the NBC series Heroes and Heroes Reborn, the graphic novel Heroes: Godsend presents familiar characters in a recognizable setting. For those who are not familiar with these series, they are about ordinary human beings who ‘evolve’ particular, individualized special powers. These ‘evolved humans’ become the heroes.

Heroes: Godsend focuses on the backstory of one singular character, Farah Nazan, a nominally Muslim, Pakistani-American college student whose life changes entirely on 9/11. Her parents worked in the North Tower and were at work that fateful day. The story moves easily between her current fight with those who are determined to destroy her neighborhood and her past where her uncle taught her how to fight and the importance of focus and devout prayer. She also discovers that she is one of the ‘evolved humans.’ Since it is a graphic novel, it also progresses quickly.

In an interview at the back of the graphic novel, writer Joey Falco responds to interview questions, saying “It’s a classic superhero origin story…. Only Farah Nazan isn’t a white farmboy growing up in Kansas or a white playboy growing up in Gotham. She’s a Pakistani Muslim, so that’s kinda cool.”

“…I knew right away that I wanted her to be a strong Muslim woman – something I’ve almost never seen in the superhero genre.”

Farah’s focus and prayers are a strong part of her character. She uses both as she steps in to defend those who have difficulty defending themselves.

In all, Heroes: Godsend is a well-written story about the development of a strong female hero. The illustrations are clear and colorful with wonderfully designed facial expressions. Its strongest plus is the diverse background and history of its primary character, making it a good novel for women from pre-teen on.