How to Get Rid of Socialism: And Solve the Fiscal Problems of the United States of America by Dr. Patrick R. Colabella CPA 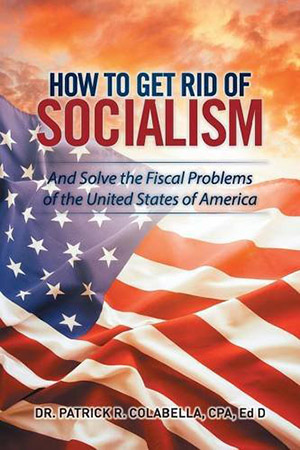 Dr. Colabella has had a long, distinguished career in the Fields of accounting and taxation. However, that in no way makes him mainstream. He encourages us to think ‘outside the box’, and has given us, in this book, several unboxed proposals to think about.

Socialism is a well-meaning (maybe) philosophy that is the root cause of the runaway deficit and the resulting financial and social dislocations afflicting the country today. Margaret Thatcher, British Prime minister from 1979 to1991 said “Socialism is great, until you run out of other people’s money.” The author feels that we are approaching that limiting factor.

The first American socialist impulse grew out of the aftermath of the Civil War, with the Civil War Pension Plan of 1862, and the impulse reached its real take off, and take over, with the Sixteenth Amendment to The Constitution in 1913. “The power to tax is the power to destroy,” referring to the income tax, only. A better tax is part of the answer, according to the author: The Withdrawals Tax.

This tax depends on all financial activity being aggregated and channeled through banks, where a tax of about 5% would be assessed and remitted to the Federal Government when withdrawn. This would capture much of the ‘shadow economy’ that now avoids taxation and would work across the spectrum, from businesses to families. Basically, this would be a consumption tax. Not an income or a sales tax or a value added tax, but a tax on spending. This is fair because, as everybody knows, wealthy people spend more than poor people, so they are taxed more. What could be fairer than that? There are suggested allowances and tweaks that would allow for really disadvantaged and elderly people. Kind of like we do now, only different.

The second major plan is to restructure the National Debt.

The Government would issue a new derivative financial instrument known as a Dretacos (debt-reduction tax credit options) that would be available to any person, country, or institution and would be used to pay down the debt and act as an investment tool for financial gain. Enough said about that. This reviewer does not completely understand this (actually, not at all, but neither did the financial wizards prior to 2008), but the word derivative, after 2008, carries alarming connotations.

The author holds that Socialism is a chief evil in the world, whether in Sweden or the U.S.A. A more refined definition of Socialism would be helpful, since certain ‘income security’ programs are allowed as necessary, but the threatening fringes are still a mystery to me.

Similarly, the Freedoms lost to the U.S. are not really clear either. I do not feel constrained in my travels or activities, except as the laws of the land indicate. Most limits and prohibitions deal with illicit substances or bodily harm. This reviewer would be more sympathetic to the author’s concerns if the dangers were more thoroughly highlighted rather than presented as an amorphous, existential threat.

The author presents a ten-step plan. In support, he provides historical data as to the origins of the problems, recommends enhanced financial literacy on the part of the citizenry, and concrete proposals to turn the tide and replace the Progressive vision of Utopia with a conservative vision of the same.

Given Dr. Colabella’s long association with taxation and accounting, I would feel wrong to dismiss his ideas out of hand. Obviously, this is just the first small part of a much longer discussion. Perhaps it starts now.