Immersion: A Writer’s Guide to Going Deep by Ted Conover 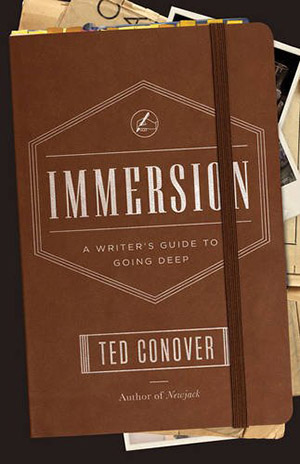 “Ted Conover has ridden the rails with Hoboes, crossed the border with Mexican immigrants, guarded prisoners in Sing Sing, and inspected meat for the USDA” reads the book’s cover blurb. It’s all about going deep and spending time getting the story, then turning it into a masterpiece.

Have you ever wondered how some of the best non-fiction writers get their powerful, in-depth stories? You’ll surely recognize these authors and their deeply immersive books: Truman Capote’s In Cold Blood, Tom Wolf’s The Electric Kool-Aid Acid Test, Gay Talese’s The Bridge, Jon Krakauer’s Into Thin Air, and such other authors as George Orwell, Hunter Thompson, George Plimpton, and John McPhee. It’s not just books. It’s also good, solid, engrossing articles in The New Yorker, Esquire, Harpers, The Atlantic, and New York magazine, and the like.

How do they do it? How much time does it take? What skills are needed? What are the advantages? The challenges? The risks? And, why are immersive writers so popular?

Ted Conover’s new book Immersion: A Writer’s Guide to Going Deep tells us how it’s done. As the cover blurb (above) reveals, he’s been there, done that, and has come home from it to write five grand and revealing immersion books, and many articles in prestigious magazines. His books include Rolling Nowhere: Riding the Rails with America’s Hoboes, Coyotes: A Journey Across Borders with America’s Mexican Migrants, and Newjack: Guarding Sing Sing. One of his best articles is ‘The Way of All Flesh: Undercover in an Industrial Slaughterhouse” published in Harpers.

“The point is,” he writes, “by simply spending time with people, being at their sides as they encounter challenging situations – by hanging out, in other words – you learn a lot more about them than you might by only conducting interviews. By eating with them, traveling with them, breathing their air, you get more than just information. You gain shared experience. And often you get powerful true stories.”

But, it takes time, and character, and courage, and if you want to try it, or simply find the answers to some of the serious issues involved, read it here. Why immerse? How to choose a subject and gain access? What do you do once you are ‘inside’? How do you go undercover (Conover calls it “moving beyond stunt”)? How to write it up? And, not least, the Aftermath….

I was particularly pleased to see Conover mention examples of Peace Corps Volunteer writing (which some of us know a great deal about). It’s certainly immersive – two years of daily living, fully inside a foreign culture. Peace Corps memoirs are popular reads, such as Peter Hessler’s River Town: Two Years on the Yangtze, Tom Bissel’s Chasing the Sea: Lost among the Ghosts of Empire in Central Asia, and Kris Holloway’s Monique and the Mango Rains: Two Years with a Midwife in Mali.

Research, says Conover, is a creative act, and nonfiction research provides many opportunities for being creative. Creativity can be exciting and enlightening, though not always easy. And as Susan Orlean, author of the Orchid Thief, has put it – “Immersion is a tricky business, and there’s clearly a need for savvy guidance from a wise, experienced practitioner.”

Ted Conover’s Immersion: A Writer’s Guide to Going Deep, one in the University of Chicago Press ‘Guides to Writing, Editing, and Publishing’, is the recommended guidebook for aspiring non-fiction writers.