In Search of Buddha’s Daughters: A Modern Journey Down Ancient Roads by Christine Toomey 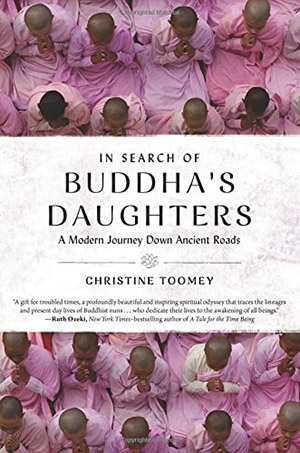 This is a book about those exceptional women around the world who have dedicated their lives to Buddhism. It covers the lives of Buddhist nuns in 20 chapters of personal stories. Ten chapters focus on the East: Nepal, India, Burma and Japan; and ten on the West: North America, Britain, France, and Beyond Bounds. The country-based chapters are full of remarkable nuns’ stories collected at each stop in the author’s travels and search for understanding about the lives of Buddhist nuns. The last three chapters under the title ‘Beyond Bounds’ stretch the boundaries by giving us exceptional stories from prisons, psychiatric wards, and a desert retreat in the American Southwest.

In her Preface, Christine Toomey writes that over the years, “I have been deeply moved by the courage many of the women I interviewed had discovered in themselves.” The deeper she delved into their stories, the more she was “touched by their strength and conviction, and heartened too.” Many of the nuns she meets, having suffered tragedy or brutality, have moved on to express not only “a longing to achieve their own enlightenment, [but] a compassion and determination to help others achieve it too.” In a world numbed “by violence, terrorism, and political and religious power struggle,” she found it “profoundly refreshing, to come across women whose lives are dedicated to nurturing the opposite.” Ultimately, what she has found can inspire us all. This book reveals, in poignant detail, and is a deep and inspiring sample of who they are and what it means, in so many ways, to be a Buddhist nun.

No book like this can ignore Tibetan and Zen Buddhism, and other well-founded and historic Buddhist traditions and ways of learning. Toomey travels and writes about places where Tibetan Buddhism is flourishing outside of Tibet. She begins by interviewing refugees and local practitioners in Nepal and India, then moves onward and outward, with deep insight, across the world. Along the way she addresses many issues, including the nature of the nuns’ dedication and commitment to the cloistered life, to the training, the vows, the celibacy, the deep rituals, the importance of meditation and, not least, to the various modes of self-expression and social service that open up to the sincere devotee.

At one point, Toomey quotes a Zen Master whose wisdom expresses much of what this book is about:

In Search of Buddha’s Daughters is an altogether remarkable book, spanning the globe and the world of Buddhist nun-hood. On these pages Christine Toomey reveals enlightening stories of saints in the making, and examples of how so many nuns, whether living within or beyond the cloister, have become powerful but unselfish models working for good and peace in the world. It’s a thoughtful and worthy read.