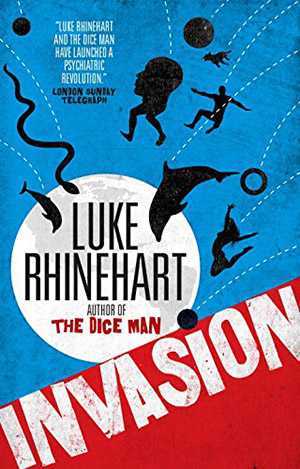 When a mysterious creature lands in Billy Morton’s fishing boat and follows him home, he’s not totally sure what to think. All Billy knows is he’s good with the kids and seems to be down with being called Louie. However, when Louie starts hacking into government networks and stealing millions of dollars, the Morton’s lives suddenly become much more complicated than they could have possibly imagined.

Luke Rhinehart’s, Invasion is both humorous and depressingly revealing. There’s nothing like an alien from outer space to give the world an outside view of itself. Through what the aliens, or Proteans as they are called, consider to be games, Louie and his friends help to show the American public how dangerous, and often self-destructive, the American political, economic, and military systems are to those they claim to protect.

While much of the commentary is not necessarily anything new, Rhinehart’s insertion of playful aliens whose games often make the world a better a place certainly is. Happiness is at the root of every decision Proteans make, an attribute they often claim the human race should incorporate into their lives as well. The Protean tendency toward fun is often depicted in the various pieces of satirical news throughout the book, many of which have the feel of coming straight from The Onion. They are the kind of articles that make you laugh despite the fact that the inkling of truth in them makes you want to cry.

With Invasion, Rhinehart has managed to successfully meld science fiction, social commentary, and humor into a darkly funny examination of American life and ideals. This is an overall great read the leaves the reader greatly anticipating what Rhinehart will come up with next.