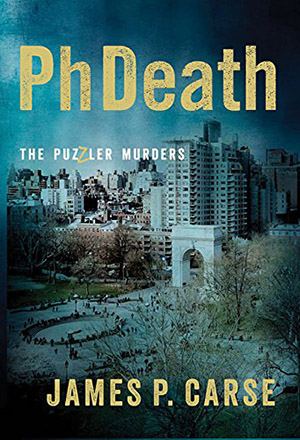 This book is, in total, a puzzler. This is probably so because, even though the author has written scholarly books on religion and philosophy, this is his first venture into fiction; It shows in the lack of traditional cadences of suspense, building to a climax, and resolution. A saving grace is that he has followed another tradition of fiction writing: write about what you know. Mr. Carse is professor emeritus at New York University and the book deals with goings on at a similar school.

The book opens with the defenestration death of the Dean of Arts and Sciences, Dean Oliver Ridley, followed closely by the first of the puzzles. The puzzles arrive at one-month intervals for ten months. They may or may not be contemporaneous with the deaths of those singled out. The whole enterprise is a little haphazard and little is resolved in the first half of the book.

The real interest in the first half is, of course, the puzzles themselves, which are presented for solution. A faculty committee is formed with Professor Carmody of Rhetoric in charge. If the reader has an interest in puzzle solving, they can join the committee in its work. Most of the puzzles involve anagrams. As an aside, I must mention that at about page 195, there appears a series of rules for solving anagrams. I looked for them on Google and didn’t find them but, respecting the author’s scholarship, I think they might be genuine and helpful if you’re a puzzle aficionado.

Mini spoiler: the puzzles identify the victims and sometimes their crimes. Yes, all the victims are guilty of some crime or perfidy, which qualifies them for death in the mind of the villain. Thus, the murderer takes on the guise of a vigilante. No excuse, of course, but it muddies the moral waters.

Mr. Carse’s greatest coup in the first half is concealing the identity of the perpetrator. You might consider it another puzzle that you might solve with luck and great deductive powers.

The second half of the book is where the real meat is. The victims and their crimes are enumerated and each one explicates a moral lapse, which often spills over into a general case, often having to do with the university system itself. This is where the Professor comes into his own as mini philosophical musings ensue. I found this process to be the more enjoyable part of the book.

All in all, you will enjoy this book if a) you enjoy word puzzles, and b) you enjoy reading philosophy. As a murder mystery, it is largely found wanting. Any thrills will be cerebral rather than visceral. It’s enough for me to recommend the book on its understated, though not inconsiderable merits as long as you’re fine with mystery, and won’t miss the thriller aspect found in books by authors like John Sandford.