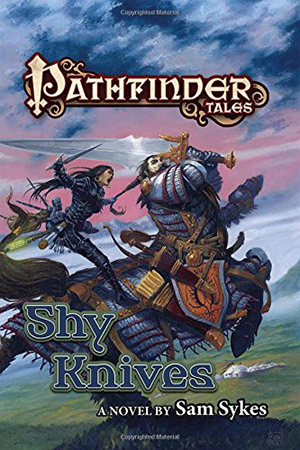 Shaia Ratani, known as Shy, is a rogue, which may mean thief, detective, con artist, or, unlikely as it is, hero. In Shy Knives by Sam Sykes, Shy is hired to investigate the death of Lady Sidara’s fiancée. How he died is not the question: centaurs raided the camp he was in and killed him. However, some details about the raid stick out to Shy, and she soon concludes there’s more to this death beneath the surface, and someone behind it.

Shy Knives awkwardly toes the line between comedy and an introspective character piece. Shy exists in the moment, running from the past and unwilling to commit to any future, unable to face her dislike of herself and yet punishing herself at the same time. Still, the narrative runs on her sarcasm and sardonic observations of “adventurers,” breaking the fourth wall to poke fun at how characters in D&D games interact with each other.

Perhaps because of this unsettled footing, the characters seem more caricatures than heroes or even anti-heroes. Moments when Shy confronts uncomfortable aspects of herself and her past, which should feel genuine, instead feel like an adolescent fantasy of what emotions should feel like, and drama, drama, drama.

Shy Knives is not a terrible book, but not up to the usual Pathfinder Tales standard. It is entertaining to read, but could easily be set down and forgotten about, never to be finished.