The Nix by Nathan Hill 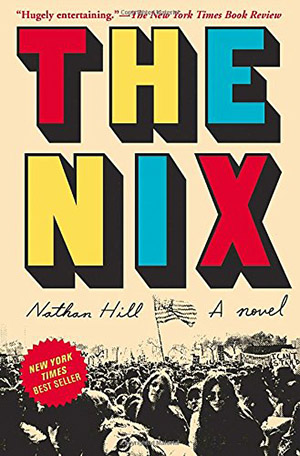 Samuel Andresen-Anderson is a lit professor who hasn’t written in a very long time, even though he makes time for his weekly online multiplayer role-playing game (RPG). His mother, whom he hasn’t seen since she abandoned him as a child, suddenly reappears in his life as an indicted political protestor. To move on with his life, he must discover the truth about his mother and reevaluate how his childhood relationships with the compelling Fall twins, Bishop and Bethany, still affect him as an adult.

“When [her father] told Faye about the Nix, he said the moral was: Don’t trust things that are too good to be true. But then she grew up and came to a new conclusion in the month before leaving the family. She told him the same story but added her own moral: ‘The things you love the most will one day hurt you the worst.’”

Hill is a skilled writer. Each chapter could stand alone as a short story but seamlessly flow together to make a complete novel. He comfortably slips into different points of view, ranging from satirical to genuine. Complex sentences vary, flow smoothly, and determine the pacing. Foreshadowing often plays a dual role as metaphors. Some of his scenes, such as the gaming and the professorial ones, are uncannily accurate and precise representations of real life. Over 600 pages long, debut novels of this sort are often called “ambitious” by reviewers. This novel is of the same caliber as Donna Tartt’s The Goldfinch, which won the Pulitzer Prize for fiction in 2014, which is also to say that despite the writer’s obvious skill and the book’s overall readability, some readers might be disappointed with the simplicity of the plot, the convenient ending, and aphorisms in place of true wisdom.