The Obsidian Chamber by Douglas Preston and Lincoln Child 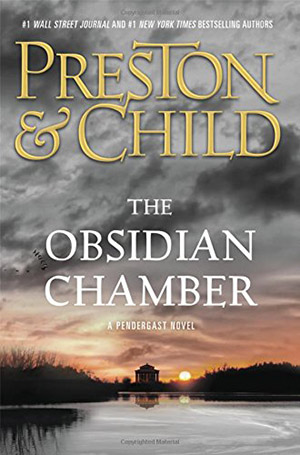 The Obsidian Chamber is the very latest novel in the Pendergast series by bestselling authors Preston and Child. Proctor, Aloysius Pendergast’s longtime chauffeur and bodyguard, races into action upon the disappearance of Constance Greene. He follows the mysterious route of Miss Greene as she travels through international channels, which takes him across oceans and into the country of Namibia. Here he meets with brutality and struggles to survive. Constance Greene however, had withdrawn downstairs into the Riverside Drive Mansion to grieve the missing Aloysius. It is here, in the basement of the mansion, that she finds herself willed into action, when a chilling personage from the past reenters her life. Constance starts making new choices in her life that conflict with everything she has previously known. By the time Proctor realizes the truth, it may be too late to save her from the consequences of her actions.

This latest thriller, The Obsidain Chamber engages the reader from the first chapter. The author’s writing style is immersive, vivid, and is largely what keeps readers coming back for more. Using Procter as the leading man for a few chapters greatly served to advance his character, one that had largely remained in the background for much of the series. Resurrecting an old nemesis may leave some readers elated by the plot twist, while others may find the move trite, and leaving them feeling somewhat disappointed in the long running series.

The novel is fast paced, and filled with tension and brutality designed to unsettle its readers. This is a thriller that makes it difficult to put the book down for any reason. Avid Pendergast fans will enjoy this latest installment, although it is likely to be a divisive book in this fan-favorite series.