The Swamp Fox: How Francis Marion Saved the American Revolution by John Oller 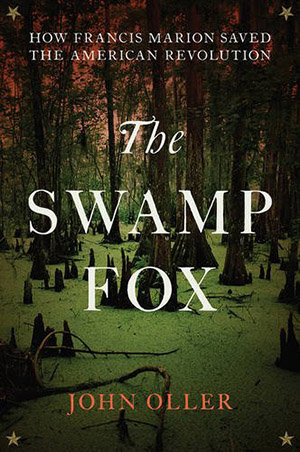 There are those of us old enough to remember The Swamp Fox, an 8 episode television series presented by Walt Disney about the courageous soldier and leader in America’s Revolutionary War, Francis Marion. This book, by John Oller, takes the romantic embellished historical figure of the TV and folklore, providing a detailed and well documented biography of Brigadier General Francis Marion. The effort by the author contains “…new information… including scholarly research, archaeological findings, pension records, military rosters, and genealogies….”

He brings Francis Marion to life despite some significant limitations in the number of personal letters. The history of his ancestors, neighboring families, and their relationships establish his early youth in South Carolina. Having been born in the same year as George Washington, both men participated in the French and Indian War, which provided them with skills they would use in the Revolutionary War. While Washington spent his time in New England, Marion’s time was spent in South Carolina. After being commissioned as a Captain in 1775 Marion fought a guerrilla war with the British to the end of 1782 when the war ended.

This is a very detailed and informative book about this man, his life, and his importance in the success of the Revolutionary War. Upon learning of the author’s background (journalism, lawyer, writer) it is easy to appreciate the detail and care seen in the book. An enjoyable and readable history, which is presented in 247 pages, followed with almost 100 pages of notes and bibliography. There is also a section of images of individuals of the era as well as 4 maps. The only negative comment to offer (one not infrequently noted by this reviewer in histories) is the limited maps. To follow the activities and skirmishes of the war the maps are limited in that a number of locations in the text are not identifiable in the maps. Also more maps allowing the reader to more easily follow the action would probably enhance their experience. It is suspected this is secondary to demands of publishing rather than the needs of the author. It was an absolute pleasure to read and learn about so important an individual to this nations’ freedom.