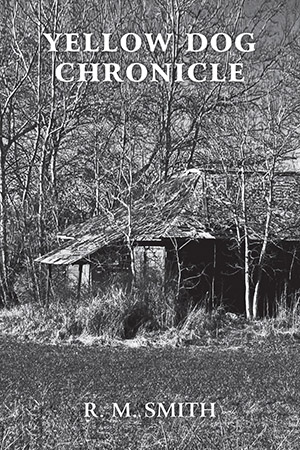 In 1920, in the isolated Steens Mountain area of southeastern Oregon, a man named Ralph Grant buried his mother Martha K. L. Grant in the cold February ground. There were no funeral homes in the dense wilderness of the region during the time, and that was “even if one could afford one,” author R.M. Smith writes. The matter at hand is an easily forgotten story, but it’s recalling is also an important one. It’s a reflection of a small pocket of time where one’s existence was made by their hands and their ingenuity, and subsequently hard choices were often made. One might have to bury their own mother out of economic hardship.

Ralph Grant the man who buried his mother that year, is author R. M. Smith’s great-grandmother’s brother. He is a distant relative brought to life through Smith’s own research and abundance of family history. Smith’s past and much of the country’s is recounted with in Yellow Dog Chronicle. The family history of R.M. Smith dates back to as early as the 1860s when his great grandparents set off on the Oregon Trail and settled in the Palouse Prairie region of the Northwestern United States. This coincides nicely with the post Civil Aar American history where it seems everyone was heading west but not everyone was surviving.

It’s enjoyable reading about where Smith comes from. Both his lineage and how he writes are relatable and humorous, although his book has some irregularities and mis-managed formatting that detracts from some of the more interesting sections. Smith’s memoir begins when his great grandfather Lorenzo Jameson crossed the U.S. on the Oregon Trail after living as a sheriff in Missouri for nine years. He crossed the country on a farm wagon with a canvas top driven by oxen and eventually finds some land in Palouse, Oregon. The uniqueness is not so much in the details of Smith’s own family history but also in the bits of American history. Consider Smith’s recounting of the schoolteacher Malvina Grant (Smith’s grandmother on his mother’s side), who in 1899 traveled alone from Kansas City to Helena, Montana and became a “pioneer schoolmarm” of her time.

These events are brought to life nicely with historical documents such as a note on the back of a picture taken by Malvina Grant on her trip, along with photographs and pieces of writing from Grant herself. In fact, Smith recounts almost his entire lineage guided by photographs and personal writings. Unfortunately, out of the supportive documentation provided, what’s missing is a diagram of a family tree, which would significantly help readers. It becomes difficult when Smith goes as far to give us minute details of his grandmother on his father’s side but also flips to other sides of his family tree on a whim – this can make things hard to follow when Smith is describing long lost family members whose names have since changed.

But for a memoir dedicated to one’s own family, and in that one’s personal American history, it hammers down the details well and in a mostly interesting way. Consider cooking, heating, and cleaning a home in 1914. Smith describes cleaning things like cleaning as beginning at 6 AM, pumping water from the well, pouring the water into a copper boiler on the kitchen stove, building a fire to start the stove, bringing the washtub in, continually stoking the fire, then rinsing and cleaning any soiled clothing in warm water – and Smith continues in great description. He makes these things interesting in his own, if for nothing more than giving detail to ways of living that are long forgotten in current society.

In fact, one of the great themes running through the memoir is technology and its evolution through its ritual failures and eventually ironed out successes. The early evolution of technology included ways of heating a home and cooking. The stoves used during the early 20th century (which in many cases also doubled for heating) involved a tedious process of starting what is essentially a campfire beneath the stove. Smith describes this process in great length, which is both dangerous due to soot build up, potential fire hazards, and difficult due the materials involved and the degradation caused by heat.

There is an appreciation in Smith’s small details from this time. If one has lived during the time it will be a fond recollection, but with the gift of retrospect the small tasks become even more important. During that time there was no other choice, so the idea of missing the simple convenience of an electric stove or a washing machine did not exist. Until this technology was in our hands people lived the only way they knew and there was a level of appreciation to this as technology progressed.

Consider the Palouse Prairie, the region of land in northwestern Oregon where the family moves. The hamlet itself where they live is an old corner house, which had long since been vacant. It’s filled with woodpeckers, old mice, and other rodents living in the walls and under the floors. The outhouse is in a large field that is used in summer and winter. The family home only has six rooms and in Smith’s storytelling life is hard. There’s work to be done, starting the stove, pumping water, gardening, canning, digging, raising, weeding, washing, and sapping in the summer heat as well as learning to survive through long winters.

Yellow Dog Chronicle is a memoir that has the gift of nostalgia, and the beauty of retrospect, but these are also important stories. Yellow Dog (which, in fact, is the family hamlet at the intersection of some wagon roads) is an isolated place. In the winter kids still walked to school, and work still needed to be done. Consider Smith’s telling of the winter of ‘48-’49 when the family was snowed in with roads filled with up to six feet of snow and children were only sent back home after finding the school furnace didn’t work.

Much of the piece itself is dedicated to breaks where machinery and farm work is described. Not all of this is as interesting as some of the family history but it is a novel piece of Yellow Dog Chronicle. Some of the detail is superfluous, such as a chapter dedicated to love letters from Franklin Breneman and Laura Morrow. As historical artifacts, and in general being a relic from a lost piece of time they are interesting, but it has the potential to make Yellow Dog Chronicle a bit of a mixed up read when it switches the formatting and seems to jump into different time-lines.

This is a very dense memoir. Almost everyone in Smith’s family history is discussed, from his aunts, uncles, father, and grandfather, to his own children. The most interesting parts and the ones people will connect with are the family stories. Consider R.M. Smith’s father. He is described as old fashioned, distant, hard, and stubborn. He is an “old-style” father whose search for work takes his family all over the country – from his younger days cooking for a sheep camp, selling men’s clothes, to running a survey crew in the Sierra Nevada Mountains. Smith writes his father well, pinning the paradox of a father who was never affectionate to his children but ultimately wanted them to amount to more than he had.

Smith’s mother was also a remarkable lady. She was a registered nurse in 1936 while she raised five children and also followed her traveling salesman of a husband all throughout the state. She would work as a visiting nurse later in life, traveling dozens of counties and making house calls. She got her MS in ‘61 in nursing, and founded the Lewis-Clark state college and school of nursing. She’s described as a “steely determined woman.” It is Smith’s statement that to live during such times one would have to be. I commend writer R.M Smith for going through such length to bring back these stories both minor and of larger historical significance. People’s lives make history and even small mundane stories interesting. Smith does well bringing what is lost and forgotten back to life in what is a very comforting read.