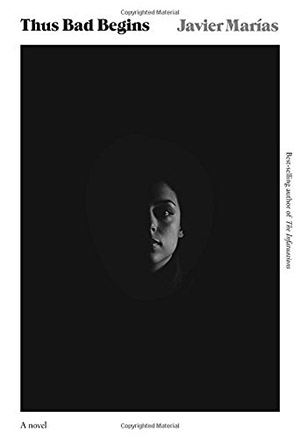 Javier Marias is the author of more than a dozen novels and his Your Face Tomorrow trilogy has been lauded by some as the greatest European work of the 21st century. Marias’ work is always a high literary endeavor, Marias himself an anglophile who got into the literary business as a young man translating the books of Updike, Henry James, and Shakespeare into his native Spanish tongue. His latest book, Thus Bad Begins, translated by the adept Margaret Jull Costa, is a long, complicated, and insular domestic tale that evokes the Hamlet quote it takes it title from, where characters “must be cruel only to be kind” and “thus bad begins and worse remains behind.”

Thus Bad Begins is narrated by twenty-three-year-old Juan De Vere who gets a job working as the assistant to a one-eyed movie director named Eduardo Muriel. The relationship starts out professionally withdrawn but soon turns personal. Juan acts as a sounding board for Muriel in all areas of the director’s life. In the course of his assistantship, Juan ends up staying with Muriel and as a result is privy to some strange strife-filled nighttime episodes between Muriel and his wife Beatriz. Muriel denies even the slightest kindness or affection to her and seems to be holding something from the past against her.

Aside from his marital strife, Muriel is preoccupied with a friend of his, Dr. Jorge Van Vechten. Muriel brings the issue to Juan. He suspects his friend of a heinous yet unnamed act committed during the time of the Franco regime. The director sees the mystery of the doctor’s action as in the way of their friendship. Juan is given the task to befriend and secretly investigate the doctor.

What follows is a Hitchcockian literary tale. Thus Bad Begins is propelled forward by its resemblance to the psychological thriller as Juan investigates the doctor and tries to understand the intricacies of Muriel and Beatriz’s marriage. The book is inevitability bogged down but its density as a nearly 500-page literary novel that uses the mystery of its characters to create tension. We often have to read for long stretches before reaching a piece of the puzzle we are putting together along with Juan the narrator. The book is full of long sinewy Jamesian sentences. They are a lot to chew on and this is often a delicious task. But every page of long paragraphs doesn’t hit and the result is a mixed bag that requires patience and stamina.

Reading Thus Bad Begins is a mixture of pure delight and work. The novel does a lot and for this Marias must be praised. Juan seeks narrative truth through his looking back to that formative time in his life when he was embroiled in the lives Muriel, Beatriz, and Van Vechten. He says early on in the book that the process he is engaged in, “becomes a matter of encircling the truth and trying to make out its shape in the distance or through girls and mists, but we never can, it’s just a ridiculous waste of time… And yet, and yet….”

The book is masterful in how the Important insight to the big question – what is truth and what is truth making – is sought out by the narrator through the narrative process. There are times when Thus Bad Begins feels like a ridiculous waste of time and yet we are pulled back in to sort through the mists and girls with Juan, searching for the truth at the heart of this dark tale.