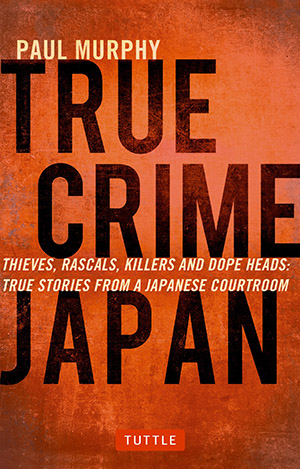 As stated in his introduction, Paul Murphy spent a 12 month period following 119 cases in the courts of Matsumoto City, which is located in central Japan. He apparently moved there in 2013 with “…my Japanese wife and two sons.” He had resided in Japan for approximately 20 years working as a writer and reporter, and understands the language. In addition to following the cases from beginning to end he interviewed a number of individuals involved in the cases from police, lawyers, defendants, to victims, neighbors, and families. The cases are presented in groupings (gangsters, mother killers, drugs…), which allow an examination of how the system treats these crimes as well as a look at elements of the Japanese society.

The very first case presented came to light as a failed attempt at arson. It has many elements that allow exploration of the societal structure, beliefs, and stresses. In this case there was pride of ownership, financial problems, marital difficulties, filial difficulties, attempted murder, and suicide. As the cases are read, it becomes clear there are significant differences between the Japanese and American society. Much of the difference is predicated on the homogeneity of the society, significant and rigid separation of male and female roles in life, isolation of emotions and from others.

The legal system is demonstrated to also be significantly different than the American system. There is no presumption of innocence. The vast majority confess and acknowledge their crime, with apology to the victims, the families of the victim, the defendant, and others. There is frequently financial compensation. All of this has an impact on the severity of the punishment. There is questioning of the defendant by the lawyers (both defendant and prosecutor) and the judge, much of it seeking and expecting admission of guilt and apology. Over the course of the year, Mr. Murphy did not witness a single non-guilty verdict. This also points to the structure of the legal system with the prosecutors presenting only cases they are sure are guilty.

In the next to the last chapter Mr. Murphy presents a summary of the legal system of Japan including his observations of the prisons, the use of forgiveness, the effect of education of the nation, the lack of ghettos, and the use of citizen judges. Overall this book was fascinating and well presented as to the legal system of Japan and its societal differences with America.