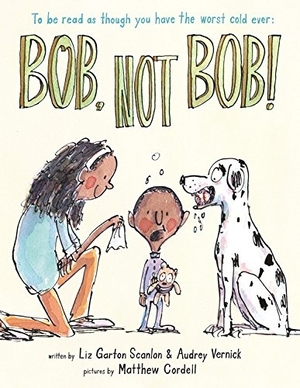 Poor Little Louie. He’s not really that little anymore, and he wants to be a strong, independent kid, but he got sick! He’s not feeling well; he’s feverish and tired, and his nose is all stuffed up, so when he calls for his mom, it sounds like he’s saying “Bob!”…which is the name of their slobbery family dog. Louie just wants his mom, and he’s frustrated with being misunderstood! Will he ever feel better?

This is a story that will make kids giggle out loud. Not just the art, although that is funny too – Cordell’s style is scribbly and full of character and motion, it makes Louie’s illness feel visceral and real, and the hand lettering adds an amusing touch to the story. Louie’s dilemmas, his hilarious interaction with his little sister where he tries to tell her that he feels “hot and sweaty” and she asks who “Hotten Smeddy” is, and of course the ever-present Bob the dog, who just wants to lick faces and play fetch.

As a parent, you have to feel bad for Louie’s long-suffering mom, however. She is a loving presence in Louie’s life, but it does seem like she’s always frantically running to his aid, and at the end, she may even have caught Louie’s cold! Parents reading this will relate to her, and perhaps will even be able to use this story as an example to kids about being kind to their mothers, who do so much for them. This book will provide entertainment, laughs, sympathy, and maybe even entertain some kids who are also stuck at home sick.