Division to Unification in Imperial China: The Three Kingdoms to the Tang Dynasty (220–907) (Understanding China Through Comics) by Jing Liu 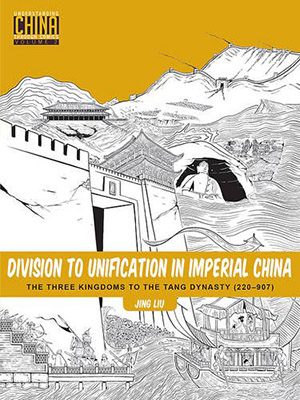 Division to Unification in Imperial China: The Three Kingdoms to the Tang Dynasty (220-907), by Jing Liu, is the second in a series of four planned comic book format presentations of the history of China. This particular installment focuses on two eras during this period of 725 years.

The first period of about 350 years occurred after the end of the 400 year Han dynasty. This era was filled with wars between peoples of the north, south, east and west with multiple changes in leadership as one or the other factions tried to gain control of China. This period is described as the Age of Division. This was followed by the second period of about 290 years with the rise of the Tang dynasty and its ultimate fall in 907.

As with the previous book, this 141-page book is in the form of a comic (graphic textbook?) with vivid illustrations in black ink used to “animate” the leaders, people, the politics, and wars that occurred during these times. The illustrations of the leaders bear a significant likeness to historical sources of images of these individuals. This attention to detail helps correlate the individual leader with the events, behaviors, wars, and for this reviewer makes it easier to follow and understand. This also applies to the timeline of the overall events and the maps and supporting illustrations of the specific events. This too is a very nice way to establish a foundation to understanding China’s history and a possible gateway to more intense study and comprehension of a very complex subject.