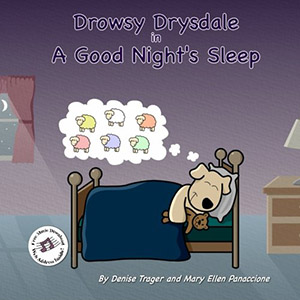 Drowsy Drysdale in A Good Night’s Sleep is a children’s book created to help kids better understand sleep disorders. Written by Denise Trager and Mary Ellen Panaccione, the story follows Drysdale, a young dog who has just moved into a new house with his family. Drysdale is so excited about this move, but he also worries about going to a new school where he won’t know anyone. Suddenly, Drysdale begins to have trouble sleeping – he imagines monsters and shadows lurking under his bed and in the closet, which keeps him up for most of the night. In this book, Trager and Panaccione show children that having a sleep disorder is perfectly normal, especially when undertaking a momentous change in life, while also displaying some practical tactics to overcome insomnia.

On a creative standpoint, Drowsy Drysdale in A Good Night’s Sleep is decent enough, but lacks in some departments. The text is very basic and at times unimaginative, and the artwork (done by Greg Pugh) doesn’t stand out quite as much as other children’s books. However, in reading this book several times, it becomes evident that there is more being offered than just the story and illustrations. The writers’ main focus is to help children through difficult times, and they do so in an excellent fashion.

Trager and Panaccione illustrate Drysdale as a normal kid: he likes tennis, carries around a teddy bear, and has lots of friends he loves to play with. His sudden sleep problems come about when his family moves to a new house – an occurrence many children undergo. Drowsy Drysdale explains to kids that sometimes moving, while exciting, can also be stressful and that dealing with a sleep disorder is nothing to be embarrassed about. The book even shows Drysdale talking openly about his sleep disorder with his dad, a doctor, his tennis coach, and his friends, emphasizing that it’s okay to be open about challenges children might be facing. Drysdale’s dad also takes him to a doctor at one point, and the doctor gives him advice on how to improve his sleeping habits, such as going to bed at the same time every night, exercising daily, not going to bed hungry, and so on. These presented solutions are effective and encourage young readers to improve their own sleeping process. There are song lyrics at the end of the book, which can be sung along with downloaded music from www.HuggableMelodies.com, where the other two books can be found as well as part of their Huggable Melodies series.

Drowsy Drysdale in A Good Night’s Sleep is sure to be of use to any child having difficulties with a sleep disorder, while also helping them feel a little less alone in the world.