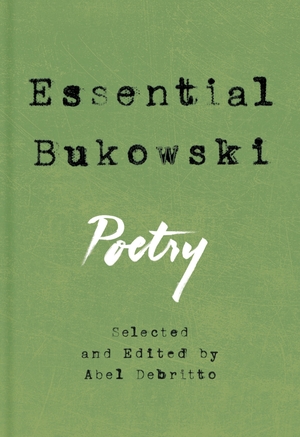 Every once in a while, one should move away from their comfort level and try something different. To read and attempt to review poetry of Charles Bukowski certainly is such a move, especially if one’s limited interest in, appreciation of, and understanding of poetry leans to poets such as Robert Frost and Ogden Nash.

Upon reading the introduction those readers unfamiliar with his work learn that Charles Bukowski is an author “with some five thousand poems on record written over a span of fifty years.” His poetry began in the late 1950s and continued until his death in 1994.

The book contains 95 poems which are a “chronological collection” and form a demonstration of his “poetic evolution.” Bukowski is described as writing almost every night “in an alcoholic stupor, trashing most of the gibberish in the morning after.”

With the first poem it is apparent his poetry is free verse with no rhyme no cadence other than at times, a style of speech. It is prose given a line structure ranging from the single word to several and at times longer. As you advance through the book a number of observations can be made. Much of Bukowski’s poetry is autobiographical: a diary of his life, his experiences, and observations. These poems center on a social life bordering on poverty with alcohol, smoking, superficial and sometimes deep relationships, boarding houses, back alleys, drudgery, but at times also with occasional joy. His poetry is succinct, blunt, and frequently harsh about himself as well as others. It is not difficult to understand his feelings or observations given the life he was living. These poems are an autobiography of the author’s life with no mask, no excuse, and extends to within months of his death. This book is interesting mostly as observing one life experience through poems that are not difficult to understand, and at times observations and philosophy one might find interesting and thoughtful.