Fascinating: the Life of Leonard Nimoy by Richard Michelson, illustrated by Edel Rodriguez 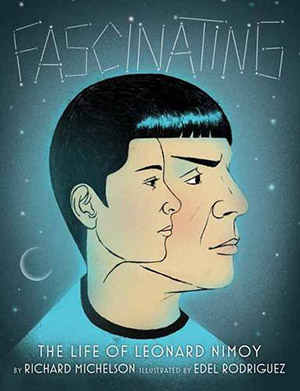 Author Richard Michelson has an inside perspective on his subject for Fascinating: the Life of Leonard Nimoy. He is an art gallery proprietor, and he represented Nimoy in his fine art photography career. They were so close that “it was a source of amusement for us both,” Michelson says, “to be regularly mistaken for father and son.” So when he writes about the Star Trek actor’s early life and career, he knows what he’s talking about, and the results are, well… fascinating.

Leonard Nimoy’s parents were Jewish immigrants from Russia, and young Lenny’s childhood was surrounded by a mix of cultures in Boston’s West End neighborhood. He sold newspapers, took pictures of his Bubbe and Zayde (grandma and grandpa), and of course, performed in school shows. One particular highlight among the anecdotes of his childhood is a surprising story of how a secret Rosh Hashanah ritual directly inspired the creation of the Vulcans’ “live long and prosper” hand gesture. His twin passions for photography and performing developed alongside each other – although his father advised him to learn the accordion to have a more stable music career to fall back on. “Actors starve, but at least musicians can eke out a living,” said Max Nimoy (Spoiler alert: Leonard did not learn the accordion).

The pacing of the story is a little off at times, as large swaths of years seem to be skipped over or sped through at warp speed. Leonard Nimoy’s earlier acting career and his later life are mostly glossed over in favor of the more interesting parts of his story: his childhood, and of course, Spock. Michelson lovingly describes Star Trek’s values of justice, peace, and exploration, in a way that makes it clear that the show informed his childhood as well.

This story is for older elementary aged kids, although many of them might pass it up if they aren’t interested in science fiction or don’t know about Star Trek (and for this generation, that’s sadly a lot of them). But that would be unfortunate, as the real value in this story is as a portrait of an unconventional actor, a creative mind, and a role model for observant and sensitive youngsters who may not quite fit in.