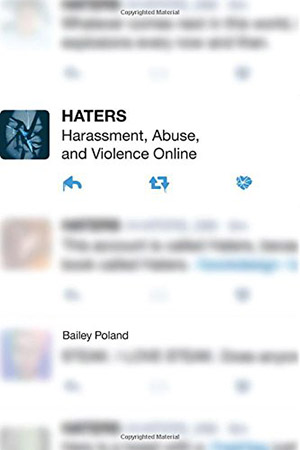 We’ll start with a disclaimer and a reproof. Reproof first: the title is missing a couple of words and is, therefore, misleading. It should read “White Male Haters” since most of the hating begins with that group. The disclaimer is obvious. I am a member of the group most engaging in the bad behaviors. Therefore, I will be careful to be fair and not minimize the gravity of the situation the book illuminates.

The contention of the author is that White, adult males are surrounded by a miasma of privilege emanating from their traditional positions of control and authority. When this privilege is threatened by the increasing numbers of people of color and, in the case put forward in Hatred, the increasing participation of women online, they can react in ways that range from dismissive to violent.

The focus of the book is on women in the professions, academia, and business who spend time online in discussion with others in furthering their careers. It seems to me that they should be able to participate without impedance.

The problem is that some, mostly white, cisgender men, take exception to their presence and try to either demean their input or drive them offline altogether. Seventy-five to eighty percent of received complaints are targeted toward women. Of course, there are other “axes” of abuse: Women of color, LGBT persons, and ethnic origins. Anything that make you different that people of ill will can dig at. But the vast majority of abuse is directed at women. The term cybersexism is used frequently by the author.

The problem came to the forefront with Gamergate, a reaction in the gaming community against Depression Quest, a game Released by Zoe Quinn in 2013. The adverse reactions started as personal attacks from associates and then spread to include input from Men’s Rights Activists and other centers of attack. This is not when cybersexism started, but it’s when it became notorious, at least within the gaming community.

The abuse can be one-on-one or, given the variety of platforms available, they can form mobs and inundate a woman with hate speech, demeaning speech, and denigrating names. It can go on for hours, days, or weeks. Demoralizing for sure and there appears to be no limit to which they will go.

The techniques of cybersexism can be annoying but mild such as mansplaining, a method of derailing, which is intended to take over the conversation or demean the woman’s input by restating in insultingly simplistic terms what has already been said. The author supplies a comprehensive list of behaviors from mansplaining, already mentioned, to doxing – the collection of personal information and putting it on the web for all to see – and some to abuse and to Swatting: making a false 9-11 call, initiating an armed response from the police which, as we occasionally hear about, can be deadly.

Online platforms such as Facebook, Reddit, and Tumbler all have ways of reporting abuse, but for the most part they are slow and ineffective. This may be slowly changing. On, or about February 7th, 2017, there was an article about Twitter’s intention to improve their reporting and reactions. Twitter didn’t quite claim a cure, so I’m sure there is still a long way to go.

Ms. Poland provides background, descriptions of abusive behaviors that she has personally experienced as well as a broad overview. She also provides resources to help if you’re attacked by online troglodytes.

It’s a problem that this reviewer was only vaguely aware of. I’m probably not alone, and I hope Hatred will raise awareness and speed a solution.