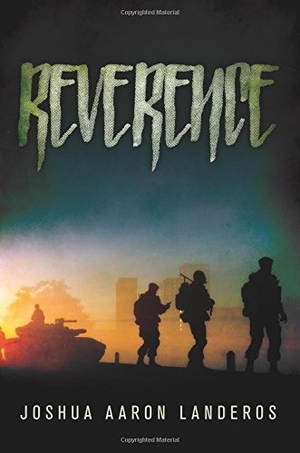 Q. Reverence is clearly a passion project of yours. Where did the idea originally come from? How long has it taken you to complete the book?

A. The idea originally came from a simple desire have a man turned into a cyborg and struggle to find his true identity. I actually played around with several ideas, including Will escaping immediately after his operation and running rampant in a modern setting. After more thought, though, I settled on building a whole word around the idea of cyborgs being the perfect ‘conventional’ weapon and how it would affect things on a global scale. Doing so allowed me to explore many more topics than my original idea.

I started the book way back in 2013, but it took me a while to really find a tone and pacing style that fit the book. Not to mention the arduous journey of my first experience with self-publishing. It was definitely a trial-and-error process.

Q. What was the most difficult part in the process?

A. Two things come to mind. First, I wanted Reverence to be relevant beyond just an action story, which is how it started out. Don’t get me wrong, I can enjoy a good action-oriented story, but for me the films and books that stick with me the most are the ones that leave you thinking about the topics they address in their stories. I went through several different versions of the story until I reached a version I was pleased with.

The second biggest challenge was editing. It was definitely a trial-and-error process, but I did learn a whole lot. So as painful as it was, I’m grateful for the lessons I learned.

Q. Reverence falls into the science fiction genre with a healthy helping of military action. What is it about those genres that made you choose them as the focus for your book?

A. Mainly the fact that I love the science fiction genre to death, no matter the medium. I fell in love with sci-fi because it can tell us all kind of things about our past, present, and future while also exploring ideas we have never seen before. Writing sci-fi for me ends up being loads of fun. As for the military undertones, it became a bigger and bigger part of the story the more I read about history and the impact military campaigns have had on it. For better or worse, war shapes the nature of civilization.

Q. Many authors have specific rituals (drinking tea, coffee, writing at a specific time, or writing in a specific setting) to help get them in the mood to write. Have you noticed any particular rituals that you’ve developed over the course of writing this book?

A. The best remedy for me is watching a really good movie or reading a very good comic or novel, namely because you watch or read them and you just sit there thinking “Man, I really want to create something that leaves that kind of mark on someone when they’re done reading it.” It leads to brainstorming on bigger and bolder decisions for your individual character arcs as well as your overall story. Also, a glass of bourbon can dust off the cobwebs from time to time.

Q. Did the characters in Reverence arise fully formed in your imagination, or were they a gradual evolution?

Oh, a definite evolution. Everyone started off with simple motives, namely to serve their commander. As I wrote the first few drafts, I was left very unsatisfied with that approach, so I looked at it again and again. I added notions of inferiority complex, religion, personal loss, and other things to give more weight to the characters.

Q. What scene, or type of scene, did you find the most difficult to write?

A. Probably the assassination attempt on Chancellor Venloran. A whole lot is going on in that chapter from many different perspectives and keeping it all balanced and clear was no easy task. I have my editor to thank for that.

Q. Do you have any particular authors, books, or films that you found inspiration from?

A. A number of things really, but some of the major points off the top of my head would be the films Children of Men, V for Vendetta, and Blade Runner. Not only are these fantastic films, but they all comment on different aspects of society, which I definitely wanted to do in my work. As for the character of Will Marconi himself, I drew the biggest influence from Alucard of the Hellsing series and Roland from King’s The Dark Tower series. Both are anti-heroes that do unsavory things to get what they want, and yet at the same time the audience can still feel for them. Like both of those characters, Will is on a quest and the question, among many in the story, is if he’ll maintain his morality along the journey.

Q. Reverence is the first in a proposed trilogy. Are there any hurdles or challenges that you expect to run into in the process of completing the remaining two titles?

A. My God, a whole lot! I’ve already written a sequel to Reverence which I am very proud of. A preview of it is provided in both print and Kindle editions of my first book, Reverence, and it greatly expands on the world. Readers can expect it to be released around April of this year. I’m also in the works of writing a prequel to the Reverence saga. I can’t say much, but what I can say is that you can expect it to be released this year as well. The prequel will focus on familiar characters like Robert Neeson, Captain Halsey, and Chancellor Venloran, but the main focus is on Will’s wife and daughter, Julissa and Zaneta. The story will explore the early stages of the UNR/rebel conflict.

The main challenge is just making sure my timeline of events is consistent.

Q. What kind of feeling or message are you hoping the reader walks away with after finishing this book?

A. A whole lot, especially considering the turbulent times we live in. At the heart of the story, I hope readers embrace the idea of constantly questioning your surroundings. Questioning his surroundings is what truly starts Will’s journey. The moment we stop questioning things we become complacent and potentially blind to the true nature of a situation. The characters who “just go with the flow” are victims in their own way, which was the idea of the tragedy behind the character, Luis.

Another important aspect of the story I wanted to present is the duality of life, especially in politics. Leaders have the power to bring prosperity to people, but also to destroy lives. This duality is also present in the rebellion movement. Both sides can promise the world and claim righteousness, but both need to be questioned. I didn’t want it to be a matter of “good vs. evil” because while I believe good and evil definitely exist, it is incredibly rare for any matter to be that simplistic.