It’s Only the Himalayas: And Other Tales of Miscalculation from an Overconfident Backpacker by Sue Bedford 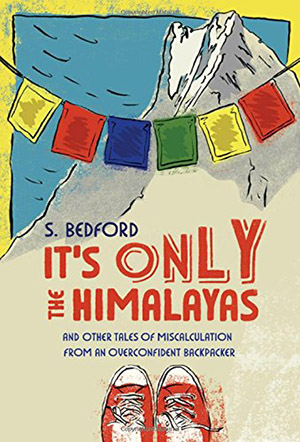 The Prologue to this funny travelers’ romp, featuring Sue and Sara, begins with sage advice from Sue’s mother: “Wherever you go, whatever you do, just… don’t do anything stupid.”

The lives of these two young women were stagnating. Both had backpacked a little, and were itching to strike out again. So, they set off to circle the globe for a year, after which Sue wrote it all up in the voice of a young millennial, with lots of effing jargon and illusion, a few frights and a lot of (new) insights about themselves and the wide, wide world.

The book is a smart, funny, hip, modern venture-saga. Even the most serious scenes are turned into jokes, in which one or the other traveler takes the hit. If you like this sort of smart writing about a long laugh-out-loud journey, here it is.

Before starting out, one asks, “Have you ever thought about where your life is going?”

And the other lies, saying “Never.”

“I have a distant cousin who did a yearlong trip around the world when she was our age,” one says, and “god, could you imagine how awesome that would be? A year of excitement and ridiculousness and grit.”

“Of escaping maturity and expectations,” says the other.

“Of realization and self-discovery.”

“Of just once choosing the fun path instead of the responsible path.”

“Of no longer submitting to crappy jobs and haunting failures”. . .

After a lot of working/saving/planning, they’re off on the adventure(s) of a lifetime. In Chapter 1, it’s Africa where, faced by the great unknown, which is both (a) big and (b) scary, and totally unfamiliar, they ponder, “while it would earn us crazy backpacker points to venture forth as two skinny white chicks going stag, there was a fair chance we’d end up raped and murdered.” So they opt, instead, to start out in the safety of a guided tour.

They chose what they thought was an Africa-based company that led rugged camping trips. Instead, they wound up on a “Barbie safari” with “Twelve barely legal blond girls in stiletto heels and cocktail dresses [who] circled like Playboy buzzards around what I presumed to be our guide, a burly guy in his late twenties sporting a ginormous grin.” You’ll have to read the book to see how that turned out….

Chapter 2 takes them on to Nepal, where ‘Life is an Uphill Battle’. “Going from the jungles of Zimbabwe to the streets of Kathmandu was like doing a line of cocaine and then getting hit in the face with a frying pan,” says Sue. At one point, they wander into a bustling Kathmandu restaurant for ‘momos’ (meat or vegetable dumplings) and Nepali chai (sweet and milky), both of which they are soon hooked on.

Once out on the trail they suffer diarrhea (from eating raw cucumbers rinsed in dirty water and other questionably prepared foodstuffs), and discover outback toilets – out in back of the guesthouses – that is; and not very hygienic. And the trail? It looked to them like (and it was) a steep stone road rising up a high mountainside. “I mean stairs. Holy crap, do I mean stairs,” Sue quips.

Mind you, trekking in Nepal is not always as bad as they experience it and Sue writes it, but… what else, she must have thought, captures reader attention? (Plenty, in fact; but that’s another story; perhaps another, more serious, and dryer book.)

Onward and upward they go, in Chapter 3 to Tibet. Then, while flying out and south toward India, “The Himalayan peaks gnashed up at us like sharks’ teeth,” she says. Chapter 4 is all about India, during the hot season, April to June. Crazy. (Bad planning, actually, if you want this experienced reviewer’s opinion.) To cool down and space out they join an ashram and do a little yoga.

In Chapter 5 they reach Vietnam and the Philippines, where Sue gets into a lot of trouble with the national airlines, among other things. Then on to Indonesia in Chapter 6 and to Laos, Cambodia, Thailand and Singapore in Chapter 7, which is suggestively entitled ‘Ninja Pussy Blow-Dart and Other Misadventures.’

When it was all over… well, this is Sue’s first book. Not bad as a racy description of two gluttons-for-punishment experiencing a lot of wild exploits with a sense of fulsome hilarity. She writes well, concluding with a short Epilogue entitled ‘Wherever I Lay My Backpack…’ back home in Canada. There, as they walk through the door, Sara’s mother shouts: [signoff predefined=”Social Media Reminder” icon=”facebook”][/signoff]
“YOU’RE ALIVE!”

You’ll close this book with a chuckle, also exhausted from it all.