Monticello: A Daughter and Her Father by Sally Cabot Gunning 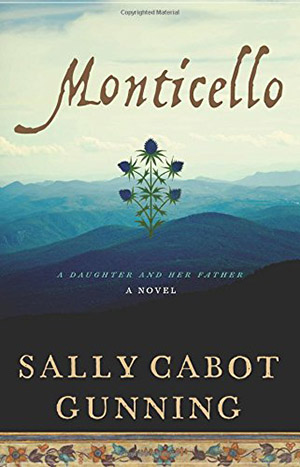 Monticello: A Daughter and Her Father is a fascinating historical fiction novel that brings to life the devoted daughter, Martha Jefferson Randolph, and her brilliant father, Thomas Jefferson. After the death of her beloved mother, Martha and her sister spent five years abroad with their father, on his first diplomatic mission to France. Returning home to the lushness of their Virginia plantation, Monticello, Martha, at 17, finds herself at odds with her once-doting father. She finds life more complicated as her father moves more into his political future. Martha is also realizing that the life she loves at Monticello will only continue with the dependence of slaves, a practice that Martha abhors. With Monticello in debt, she knows her family depends on the labor of their slaves. She marries a distant cousin, Thomas Randolph who has ideas about freeing his slaves on his land. It is an idea that draws them together but Martha finds herself alone and not loving the house that Thomas has inherited. It is also not without debt. She tries to live her life with Thomas, amidst demands of motherhood, politics and scandal. Rumors abound throughout the countryside about a physical relationship going on between Thomas Jefferson and Sally Hemings, a light-skinned slave who had long been acknowledged as the half-sister to his deceased wife. Martha noticed that Sally no longer did chores around Monticello when Martha visited. She also noticed similarities between her own children and Sally’s when they would play together on the lawn. Worried about his political future, Martha confronts her father about the issue, however he is evasive in his answer. Continuing to raise her own children, her thoughts are never far away as she longs to return to her beloved Monticello.

Sally Cabot Gunning provides a strong and thought provoking novel that looks at a couple of the issues present at that time period between 1789 – 1820s. One issue involved the life of a farmer. Farmers were in constant debt with the cost of seed, the foul weather decimating crops some years, and the fact that everything had to be done by hand. Many of the white landowners in certain areas had a conflict with the owning of slaves, but they also realized they could not survive without their labor and were not ready to take a stand to abolish it yet. Another issue that the book brought into focus was the custom of the day involving women. Women were not held in high regard. Women could not own property. Martha Jefferson Randolph, although in this story “fictionally imagined,” was a figure who started questioning these ideas on both fronts. The characters being real people of the time period can help spark a desire in readers to learn further. This reader found the story a little bit slow at times, but still feels that it is a wonderful book to encourage interest about one of our founding fathers.