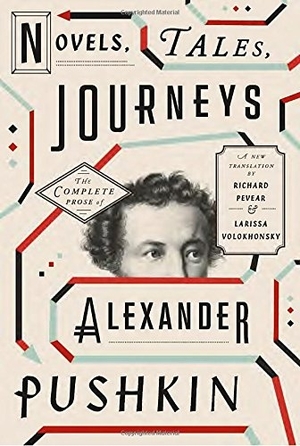 Alexander Pushkin’s great-great-great-granddaughter, Englishwoman Marita Phillips, wrote an opera – Pushkin: Poet and Czar – that just debuted in Moscow on February 4, 2017, according to The New York Times article by Neil MacFarquhar. The opera captures Pushkin’s real-life death during a duel in 1837 with an officer accused of seducing Pushkin’s beautiful wife.

While Pushkin is revered in Russia, he’s undeniably still relevant in the English-speaking parts of the world, too. In addition to the opera, Anglophones can now enjoy Richard Pevear and Larissa Volokhonsky’s translation of Russia’s greatest poet’s novels, tales, and military campaign journeys. Richard Pevear writes in the introduction that Pushkin created modern Russian prose:

“[Pushkin’s] aim was to make the tales as unpoetic, as purely narrative, as possible. They have no commentary, no psychology, no ideas, no flights of rhetoric or authorial digressions. They are cast as local anecdotes, and are told so simply and artlessly that at first one barely notices the subtlety of their composition, the shifts in time and point of view, the reversals of expectations, the elements of parody, the ambiguity of their resolutions” (XIV).

This accurately describes Novels, Tales, Journeys. While the reader can see the social commentary, Pushkin stripped the parts that make his poetry and Eugene Onegin, a novel in verse, masterful, but, at the same time, he laid a sturdy foundation for Dostoevsky and Tolstoy to reinsert some of the omitted poeticism and create their own masterpieces.

Novels, Tales, Journeys contains rough and partially completed works: novellas, short stories, Pushkin’s campaign journey to Arzuum, and fragments. With the exception of when he attempts a first-person female point of view, these stories range from good to great. Many of these pieces were abandoned or not polished and, as a result, don’t compare to Dostoevsky and Tolstoy, yet will give scholars plenty to study.

For anyone with just a passing interest in Eugene Onegin, this compilation will most likely disappoint. However, for Anglophones who studies Russian literature and Pushkin, Novels, Tales, Journeys is a treasure trove.