Rogue One: A Star Wars Story – The Official Collector’s Edition by Titan 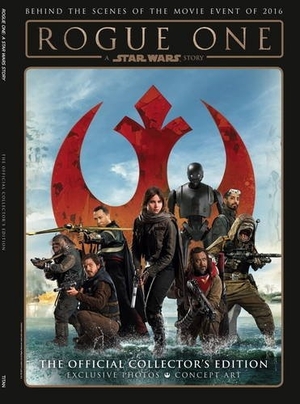 Rogue One: A Star Wars Story – The Official Collector’s Edition provides an overview of the ongoing events surrounding the newest film in the Star Wars franchise. This book contains information on the film’s characters, the Rebel’s arsenal, and the Empire’s troops and machinery, as well as summaries of the previous films and certain plot elements of Rogue One. It also includes some concept art from the creation of the film for the enjoyment of its readers.

The word that instantly describes Rogue One: A Star Wars Story – The Official Collector’s Edition is “brief.” Everything about this book feels quick and on the surface. Because of this, it’s difficult to decipher who is the exact audience for this book. Diehard Star Wars fans will already know the majority of information provided and will go looking for different books that contain more, and novice fans may find themselves a little confused over the information splayed out without much direction.

The book starts off with an introduction of “The Story so Far…” and gives a short overview of the Star Wars prequels (The Phantom Menace, Attack of the Clones, and Revenge of the Sith), and each film is only allotted a few paragraphs for basic recap. Then the book delves into character summaries, which is perhaps the most disappointing aspect of the entire book. As a fan of Star Wars, this reviewer hoped that the Collector’s Edition would cover plenty of backstory for the enormous cast of the film – most of whom didn’t get much backstory in the movie. Unfortunately, the descriptions of each character do not go into great detail; the writing does not tell readers much that they couldn’t have already gleaned from the film. There’s a bit of interesting backstory here and there, and a few tidbits of new information (like how Galen and Krennic met), but for the most part the characters only get a couple paragraphs of description – Jen, Cassian, and Vader get two pages. Vader’s description is the most infuriating, because it has very little to do with the Rogue One film and focuses more on the animated Star Wars Rebels series. Another frustrating part is, in the description of Chirrut Îmwe, the book reads, “The cause of his blindness is something that Îmwe keeps a close secret.” Despite it being a secret the character keeps, it makes very little sense to keep it a secret from fans who wish to know.

There are plenty of great film stills shown throughout the book, as well as some explanations for different ships, droids, and machinery. The guide to all the different types of Stormtroppers (i.e. Stormtroopers, Shoretroopers, Death Troopers, Imperial Royal Guard, etc.) may be the best part of the entire book, providing brief, but actually fitting, descriptions that simply lay out information some fans may not know. The cover of the book claims to contain exclusive concept art, but there are only seven images at the back of the book; one might hope for a bit more from a book promoting itself as the “official collector’s edition.”

In the end, while Rogue One: A Star Wars Story – The Official Collector’s Edition covers all its bases, it does so on a very surface level that will leave readers and fans wanting more – and not in a good way. This book serves best, perhaps, as an introduction to new fans hoping to learn more of the fandom. While somewhat enjoyable, this book is far too simplistic for any hardcore Nerf Herders out there.