The Circle: A Novel by Bernard Minier 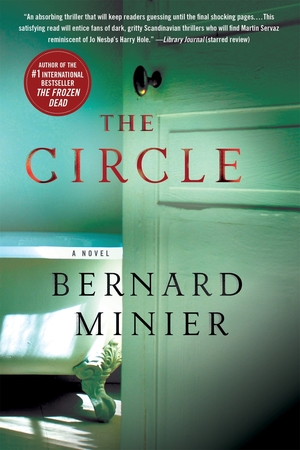 One night during a thunderstorm the old man living across the street heard music. Looking through the window, flashes of lightning illuminated the swimming pool, which to his amazement was filled with floating dolls. A more careful examination identified a young man sitting on the edge of the pool. Thus, the death of the owner of the house, a single woman, is discovered and Commandant Martin Servaz enters into the investigation. From here the Commandant must unravel the strange findings at the scene in a small university town in southern France and attempt to identify who was responsible.

As Servaz proceeds he discovers that the findings bear a striking resemblance to a previous disturbing case. Unfortunately, there is also overlap with Servaz’s previous marriage, and their children. The discovery of another crime widens the possibilities and adds to the confusion over who is the guilty party. The story builds slowly, expertly increasing anxiety and unease to an unexpected resolution. The case’s timeline stretches only over the course of one week, with much occurring during this time. There is much to enjoy about the story and the writing of the author. Bernard Minier’s The Circle is a crime thriller with a continuous creepy flow that keeps readers engaged and escalates right up to the end.