The Librarians And The Lost Lamp by Greg Cox 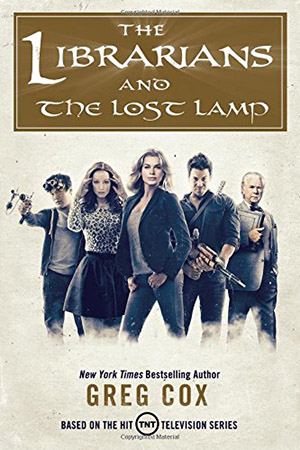 Greg Cox’s The Librarians and The Lost Lamp, a tie-in beginning of a trilogy based on the television show, The Librarians, is an adventurous new addition to The Librarians universe; one full of magic, mythology, folk lore, history, mystery, and complex characters. Being a Librarian can be a challenge at times, especially if you are the only one fighting against the villains who seek the magical artifacts that can disrupt the universe’s balance. A Librarian’s position is to retrieve these long forgotten, magical items before others can use them for their own personal gain, bringing disastrous consequences. Flynn Carsen was the only Librarian left in 2006, where he had to face numerous challenges on his own such as the owner of a brewery in Scotland stumbling upon Robert Louis Stevenson’s recipe for creating the potion from The Strange Case of Dr. Jekyll and Mr. Hyde. Additionally, his main concern was to outsmart an ancient organization, the Forty, from stealing Aladdin’s Lamp. In 2016, even though Carsen still enjoys working alone, more Librarians as well as their Guardians are able to help and their mysterious new case dates back to Carsen’s past. This case takes them to Las Vegas, where luck cannot be counted on as it is always changing.

This tale is told through a third person point of view and uses each character’s thoughts to enhance personality, development, and character. This perspective worked very well, as not only was the book split between the past and present, multiple characters, protagonists and antagonists were able to have their own, unique voices. In 2006, Flynn Carsen and Dr. Shirin Masri, the curator of a museum in Baghdad, where an ancient manuscript of The Arabian Nights was stolen, take turns displaying the adventure through their different perspectives. Carsen adds a whimsical humor to his devoted chapters along with strategy and different insights on other folklore and myths that he has encountered. Masri soon goes from a skeptic to a helpful partner on their magical and dangerous adventure to retrieve the lamp. The reader even gets a glimpse of the Forty, their motivations and the organization. In 2016, the reader meets the new Guardian, Eve Baird, and the Librarians, Cassandra Cillian, Jacob Stone, and Ezekiel Jones, who are aided by the mysterious Jenkins. Each character develops through the novel and their personalities’ vary from a leader, an architecture enthusiast, a skilled and egoistic thief, and a woman with gifts of seeing patterns and probabilities. The characters are diverse and loyal to each other, not just to their Librarian duties.

Additionally, the vivid descriptions add to the two different time periods – pulling the reader from 2006 to 2016 and back to 2006. The vastly different countries are well crafted, as are the overlapping adventures and mysteries. Shifting between two different years that were a decade apart was very interesting and intriguing, pacing both the story and causing the reader to maintain interest in both story lines. Additionally, the magical elements of the book, which range from telling stories to a goblin to playing fetch with Excalibur added to its uniqueness in both the adventure and the mysteries of the Library.

Loyalty and betrayal are key elements in this story in addition to the conflict between good people trying to save others and those who are selfish, evil and want what they should not have. There is a clever twist at the end of the novel as well. Some mysteries pertaining to Carsen’s past and his adventure with the lamp are kept untold and would be interesting to read about in future adaptations as readers will want to read more of his story. As a bonus, the book is very accessible to readers who are not familiar with the television series.

The Librarians and The Lost Lamp is recommended for people who enjoy fantasy, adventure, folklore, history, and magical tales told from varying perspectives with overlapping story lines that create a unique and intriguing read.