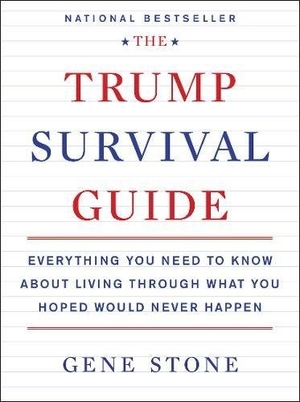 The election of Donald J. Trump as the 45th president of the United States was a surprise to the nation. From the outset, reality star and bankruptcy mogul, Trump seemed like a long shot until he wasn’t. In the days, weeks, and months following his inauguration, many are left scrambling to figure out what to do, how to go about fighting and standing up for their rights, the rights of others, civil liberties in the United States, and the questionable policies Trump looks to put into the place as president.

The questions in the minds of those who don’t side with Trump and his politics are: how do you survive the next 4 (possibly 8) years and what can you do? Gene Stone’s The Trump Survival Guide looks to answer those questions and is a succinct crash course on twelve of the biggest issues facing the US over the next four years. Stone’s book is a strong and helpful tool for those who want to engage in conversations, contemplations, and actions.

Stone starts his book with a smart and succinct introduction. He makes the point that Trump “has not put forth a clear and consistent ideology” and is fair to Trump in his overview. In a time when it would be easy to do otherwise, Stone gives Trump the benefit of the doubt arguing that he could become a pragmatic and strong leader as others have in the past when stepping up to the challenge of the presidency. Stone posits two other possibilities as well, one where Trump will be ineffective and a forgotten non-entity and one where he will be an absolute disaster. The book then follows with the information needed to be informed as we watch this presidency unfold into one of these scenarios.

Following the introduction, the book is broken up into section each centered around a topic, such as Civil Rights, The Economy, Education, Energy, Obamacare, etc. There are twelve of these sections in total. Each section provides a solid “Background” on the topic, then has a section called “What Did Barack Obama Do?” which examines just that and is followed by a speculative section called “What Might Trump Do?” The Trump sections are based on and draw from the various positions Trump took on the campaign trail and use quotes to back up the projections. Lastly, there is a “What You Can Do” section and it is followed by a reading list of books that offer more info on the topic of the section. The result is a strong and easily read book. Stone collects in one place a distillation of information making it easy for anyone to get informed and to take action quickly.

The Trump Survival Guide is perfect for the overwhelmed, the confused, and for those who feel powerless and lost in these times. Stone’s book is less for those who engaged in the causes already, those deep in the work, and more for the people looking to participate and fight for change due to the uncertainty of our civil liberties going forward.

Stone’s book is worth a read, definitely worth a browse, and a great tool for people to dip in and out of as things come up in the future. Stone’s book is the essential information, the quick guide, to getting what you need to get out there and to fight back.