True Genius: The Life and Work of Richard Garwin by Joel N. Shurkin 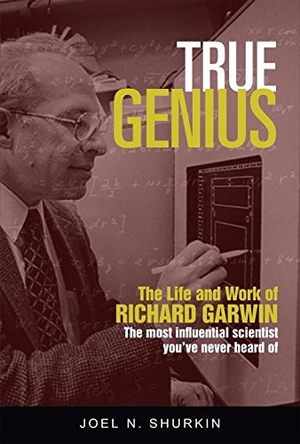 Joel N. Shurkin has created a thorough narrative of the life and impact of Richard Garwin, a pivotal physicist of modern life. This biography captures great detail in terms of world events, thinking, competing ideas, and changing cultures during most of the 20th century. One might worry that a biography about a physicist would be sterile or impersonal, but given what appears to be a charismatic Richard Garwin and a talented biographer and researcher, this book is anything but. It is detailed without being a crash course (pfew!).

I actually found many of Richard’s experiences, learnings, and passions to be quite relevant to today’s political climate. The insight shared about collaboration of government and science community, tension with Soviet Union, nuclear power, special interest group influence, modern media etc., shed some additional light onto key relationships that are being threatened despite a co-dependence. Shurkin, via Garwin’s experience and words, also prompts the reader to consider the moral quandary of these great minds.

One of my favorite chapters detailed his work within the healthcare sector. With great skill Shurkin connects Garwin’s early work to later focuses in medicine including epidemic prevention – innovative technology aimed at improving healthcare quality. In effect, 1960s Garwin designed the internet concept, electronic health records, and a version of modern day of population health/big data. It fell prey to stereotypical conservatism: (multi-factorial) slow rate of adoption in medicine. A key part of my professional life is quality and process improvement, which encompasses innovation. Hence, the following quote really stood out:

“I believe our nation is often faced with the choice between very large investments in the current way of doing business and substantially smaller investments in more efficient and economical ways of providing better service.” Richard Garwin (p. 236)

I hope that this book leads to the creation of a documentary. I would love to have visuals and audio to supplement the author’s great work and add more color and depth to the life and contribution of Richard Garwin.