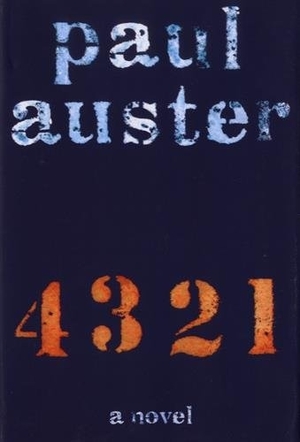 Paul Auster is a madman. His first novel in seven years, 4 3 2 1, is nearly 900 pages and is narratively a never-ending ocean of stories featuring dozens of characters. 4 3 2 1 gives us four simultaneous yet different narratives genetically connected by one life. To give a quick understanding, 4 3 2 1 is broken up into the four lives of Archibald Ferguson or Archie. Each chapter is broken down into 1.1, 1.2, 1.3, and 1.4. 1.1 then connects to 2.1 and each life is a different narrative culminating in four parallel stories, or the four different paths of one life.

It becomes an immense book, but part of what makes it interesting is how these four stories intersect, and how in some of them one life may change drastically through small actions, and even further where one leads may be far different than another.

4 3 2 1 spans the historical context from each of these narratives from Archibald Ferguson’s grandfather enters New York Harbor on the first day of 20th century, the Kennedy assassination, to the war in Vietnam inside of these four simultaneous yet different timelines. The book is as heavy as a bible, and bears the weight of as many stories. It may in fact just be the bible on being a writer and learning how to write. All four timelines in 4 3 2 1 display this struggle of learning to write and thus it is a novel in love with the process.

It is also a novel in love with art and with film – referencing movies like The Loneliness Of The Long Distance Runner, Children Of Paradise, and Bergman films such as Wild Strawberries and The Seventh Seal. Archie meets a friend, Andy Cohen, who also shares his love of film and opens Archie to his own sexuality.

It is a coming-of-age in the college experience during the 60s as well as a novel about coming to terms with one’s sexuality. Each timeline works differently and ultimately it is a novel about identity and being able to see each path from afar; the reader may be a god of some sorts here, or just a regular person seeing the way a universe unfolds with minute changes in the waves of one person’s life.

Consider one of Archie’s short stories, “Right Left or Straight Ahead” to be a smaller breakdown of 4 3 2 1. It is about a man, Lazlo Flute, who comes to a crossroads and must choose going left, right, or straight. Each path leads to a different outcome from Lazlo and ultimately it is suppressed version of 4 3 2 1 itself, and also illustrates Auster’s genius to craft stories within stories. That’s what makes his large novel difficult to dissect; it is vast and deep like an ocean, and as a practice one could pick up the novel, open it, and be engaged with a full story on any page.

The question then becomes what is Auster telling us here about the way a life is lived, and subsequently, the choices we make? 4 3 2 1 is ripe for a classic nature vs. nurture dissection, but I believe Auster is thinking more about the storytelling format and how to give us more than just the standard linear novel. Dissecting the plot of 4 3 2 1 is futile. It is plotless in the most beautiful sense – in the same way a single human beings course through life is ultimately plotless.

Auster’s writing has come to a point where the standard novel simply will not do. He has never been a standard storyteller – novels like Invisible, Moon Palace, and now 4 3 2 1 attest to that. They each take storytelling components and turn them upside down.

To even consider writing a novel like this takes a bit of a madman. To succeed at doing it takes years, and I think Auster has mostly succeeded here. Some readers may be turned off by the length and the space between narratives. It is indeed a large novel, but it is mostly engaging. Consider early on when the difference between newspapers in books is talked about. “Books moved forward in a straight line from beginning to end, whereas newspapers were always in several places at once….” Auster somehow balances being in several places at once for over 800 pages. It’s an achievement without question.

Then the beauty of 4 3 2 1 and perhaps some meaning becomes clearer. It’s a novel to be lived, discussed, read over and over, as one will always find dozens of stories. It is the examination of a life and all the stories that fill it. It is also Auster’s best work. I’d liken it to books like Roberto Bolano’s 2666 in its grandeur or even William T. Vollmann’s The Royal Family. Auster is a decorated author and with 4 3 2 1 he may have written his Moby Dick, not due to its length, but with pinning down the life of Archie Ferguson – nothing is as elusive as a great story or a great character. In 4 3 2 1 Auster has given us an ocean, and in that ocean are dozens of stories worth reading.