America’s Needless Wars: Cautionary Tales of US Involvement in the Philippines, Vietnam, and Iraq by David R. Contosta 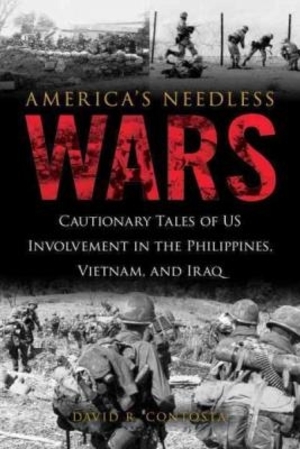 Most of us don’t remember the Spanish-American war. More of us remember Korea, more yet Vietnam, and who could forget Iraq?

All different, yet similar in one respect. They were all unnecessary. None of them advanced America’s critical interests, none of them made lasting, positive, changes and lastly, they didn’t fulfill the criteria of “just war theory” attributed to St. Augustine of Hippo some sixteen hundred years ago; that theory demands that any war must meet two criteria: Necessity, and be the last resort. Yes, the world would be a different place today if those wars hadn’t happened, but not in a radically different way, and conceivably, better.

Mr. Contosta covers the events leading up to each war, a brief summation of the actual fighting, and the aftermath. The common threads seem to be: Testosterone, manifest destiny, and racism. The first supplied the urge, the second the reason, and the third, a justification. Throw in a healthy dose of hubris, and stand aside.

Remember the Maine! Due to simmering tensions with Spain, President McKinley dispatched the battleship Maine to Cuba as a show of force. As we remember, it blew up. The yellow press and (here comes the testosterone) members of Congress called for war and the die was cast. Interestingly, the dangers of putting the coal bunker right next to the ammunition magazine, separated only by a bulkhead, were known but discounted in this case. It was just too neat. Out of this, we gained suzerainty over Cuba, the Philippines, and Puerto Rico.

The other three, as outlined by Dr. Contosta, follow a similar pattern. A perceived national interest, the assertion of American primacy, the beating of the war drums by those who felt it was a function of the national manhood to school the inferior races and cultures by force of arms, and the browbeating of opponents with the threat of being labeled “soft on whom or whatever.

Each of the leaders of the United States leading up to each conflict – McKinley, Roosevelt, Truman, Kennedy and George W. Bush – were either driven to war by inner devils or unable to resist the forces intent on war arrayed against them. Apparently, leadership does matter.

David R. Contosta PhD is a historian and prolific author and editor of historical books. America’s Needless Wars is not only an informative and interesting read, it comes at, what this reviewer sees, a dangerous time when the machinery that causes us to blunder into needless wars is tuned, oiled and ready to go. This book may provide an antidote to the disease.

In addition, I would recommend another book as a complement to this one. That is The Right Way to Lose a War by Dominic Tierney, also reviewed on Portland Book Review. It adds criteria to be considered before waging war.