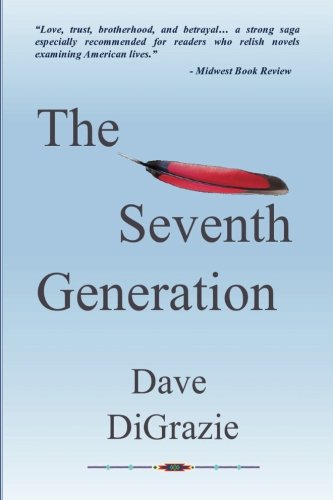 When Editor-in-Chief Whitney Smyth gave me this chance to share my literary hopes and struggles, I wanted to sing to you, scream at you, convince you to care. My writing is a kaleidoscope of peril. Schizophrenic self-review of the characters and storyline I’ve created. Judging it, spending months fixing it. Stinging slaps from writers’ circles; a spouse; well-intended friends. Double-peril if you reject it. Or worse, slice me with the sabre of indifference.

I’ll wrestle past self-doubt. I will entice readers who are thirty and forty years younger than me, to sample my “old guy” perspective. An old guy whose name is not Grisham or King or James Freaking Patterson. Are mine the only eyes equipped to see the magic on these pages? Good thing I’m mostly okay at my day job.
Those are the struggles. And the hopes. Here comes the “why.”

The Seventh Generation is the cry of a person who left his hometown as a very young man because it seemed right, back then. Now, four decades and over 400 miles removed, how the hell can I convince you that my Buffalo is a place you might care for? Waist-high snow. Four lost Super Bowls. Vacant buildings. The mob and corruption and… at least our river never caught fire. But it sure could have. I wrote The Seventh Generation because I go back to visit that river whenever I can.

Mayor Sal Frandino, perhaps the most central character in the book, is my vehicle for communicating the issues my hometown and the entire Rust Belt faced in the second half of the 20th century. These issues, and the exodus of people from that part of the country toward more warmth and opportunity, define our national heritage as strongly as our 19th century westward expansion. Millions of American lives have been profoundly affected by those issues. I wrote The Seventh Generation in part, to show you how and why that’s true.

If The Seventh Generation were a city, it would be populated with inconvenient aspirations, in the face of hopeless situations. With characters whose only coping mechanism in the face of love-stifling reality, is to turn their feelings off. With Native Americans, ethnic Europeans, African-Americans, WASPs, all failing to educate one another. These failures, punctuated by occasional successes.

Flash forward to the second decade of the 21st Century. Can these people I’ve invented redeem anything as they grow old? Stripped of everything it had going for it, can the city live? Silly questions – or perhaps you have never known someone who has Buffalo coursing through their veins. The Seventh Generation’s story arc extends beyond my fictional account. A new miracle continues to happen at the eastern end of Lake Erie. Can this city be a central character in a novel? Have its people learned some things from each other, after all? I wrote, in order to find out.

Dave DiGrazie‘s journey began in a middle class ethnic neighborhood in Buffalo, New York that had its share of characters. After cooking (and eating) his way through his high school and college years in his dad’s small restaurants, he became a decorated military officer. Then, he began to make things up and write them down. Dave calls Northern Virginia home and lives with three wonderful people – his wife and two children. He still makes a very mean home-made pizza when he’s not putting his imaginary friends and foes in each other’s way.

Dave confesses to few vices, but one he can’t deny is addiction to his hometown’s star-crossed professional sports teams.