Instrumental: A Memoir of Madness, Medication, and Music by James Rhodes 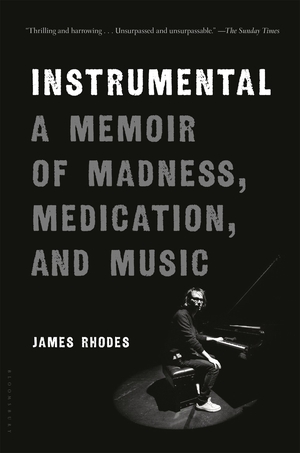 Rhodes has concocted an unusual format for this memoir, which is also in development as a feature film. The chapters are titled as “Tracks,” as one would find on a record album. Each track includes an introductory page that references a specific performance of a piano work that the author particularly enjoys. These introductory pages are quite detailed, and may be a bit beyond the reach or interest level of the non-musician average reader. The author is passionate and opinionated in his descriptions off the performances.

Rhodes has had, to say the least, a rather unusual life. Starting at the age of six, the author was constantly physically abused by the gym teacher at his school for the next five years. Although one of Rhodes’ teachers was suspicious about why a previously carefree and happy child suddenly became miserable and withdrawn, the author’s own parents were entirely oblivious to these changes of behavior. Over the years, the author describes how music has repeatedly saved him from his many periods of mental disease and an inability to relate to people or what most of us would regard as normal situations. During Rhodes’ high school years, he continued to have a variety of homosexual relationships, and was generally miserable. His first piano teacher was impressed by the intensity of his interest in the piano, but when he helped arrange a scholarship to the Guildhall School of Music, the author’s parents refused to allow him to attend music school.

After various mental breakdowns and drug abuse, the author makes his way into the world of advertising sales, and finds himself earning over three thousand pounds a week. The author then describes his first marriage. As the reader might anticipate, this relationship does not work out very well. In fact, the author’s ex-wife sued Rhodes’ publisher to prevent the publication of this book. It is puzzling to the reader exactly why “Jane” sued to keep the book from being published. Rhodes’ descriptions of her are uniformly complimentary, and he accepts the blame for the relationship going south. Apparently, she simply did not want their son to ever read about all of the unfortunate aspects of his father’s life. It is also possible that she resented the fact that the author only revealed the misery of his life experience at the point when he realized that they would not be able to stay together. It is also impossible for the reader to know whether certain edits were made to the book on the basis of the lawsuit.

It isn’t necessary here to follow the sequence of the rest of the authors’ odyssey. Through the help of wealthy patrons Rhodes was able to get sufficient therapy to be able to study piano, function, and another benefactor provides him with the resources to make an album, and took on the role of Rhodes’ personal manager. He has been able to pursue a mostly successful relationship (and marriage) with another woman, and this has led to best-selling albums and world-wide concert appearances.

Near the end of his book, the author outlines a number of possible ways of expanding the audience for classical music, such as playing in non-traditional music venues, including ones where drinks are available. There is a sort of interesting disconnect between the author’s notion that

Instrumental will be most appealing to readers with a serious interest in classical music, or to those who may be inspired by the author’s ability to overcome abuse and a lifetime legacy of insecurity. In general, the book is easy to read, and an interesting synthesis of formality and down-to-earth language and emotions.