Love and Other Pranks by Tony Vigorito 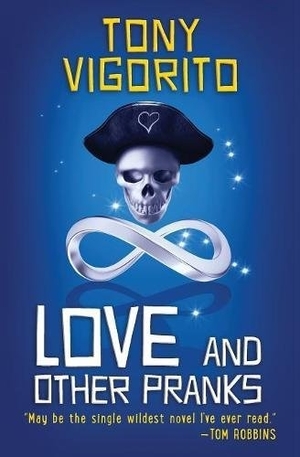 Love and Other Pranks, written by Tony Vigorito, follows the destined meeting of Merlin and Lila. When their paths cross at a Castro street party on Halloween night, the two become instantly smitten with one another. They begin to learn about each other’s lives quickly as they fall deeper in love, and Merlin soon becomes aware of Lila’s selfish, conniving ex, Ivan, who runs a cult called the Holy Company of Beautiful People. As the two develop their relationship in present day San Francisco, readers are also taken to the sixth century Caribbean, wherein they’re introduced to Flaming Jane and Crow, who bear many similarities to the two protagonists – except for, y’know, being actual pirates and all.

Love and Other Pranks is, if anything, original. It’s a quirky, silly story about love, robbery, rock-paper-scissors, false cults, parrots, and swashbuckling adventure. The story shifts back and forth seamlessly in the two different time eras that it is set in. There’s adventure and romance on every page. What’s more, Vigorito has a unique voice. Though not quite on the same level, Vigorito writing style bears many similarities to the late Terry Pratchett – mostly when it comes to the humorous flourish in his work. This author excels in the absurd and the hilarious, which shines brightly in his dialogue, scene set-ups, and characters (though mostly in his minor characters, such as Chris Bliss).

That said, the story does get muddled at times; too much description, backstory, or characters’ thought processes drag down the plot. Vigorito would have done well to reign himself back and perhaps done another major edit before releasing the novel, as there tends to be too much information throughout. Details and vivid descriptions are wonderful, but in Love and Other Pranks the reader may feel overwhelmed, or just flat out bored, at times by the bulkiness of the paragraphs. The characters are given so much to think, say, or do, that at times their actions feel disingenuous and bizarre. The plot line set in present day California reads much better than the pirate story, which is a bit of a dredge to get through for most of the novel.

All in all, Vigorito has crafted a fun and adventurous third book, though gives the reader perhaps a bit too much unnecessary information.