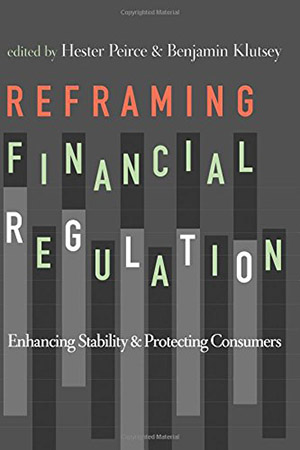 Regulations are always with us. They may keep us from doing something we want or they may keep someone else from doing something to us. This is not an inconsequential consideration as the trend to deregulate, starting with President Carter and accelerated under President Reagan, surely contributed to the failures of the Savings and Loans, Enron, and later, the giant crash of 2008.

Obviously, some regulation is needed but finding the sweet spot between too much and too little is a real problem.

Reframing Financial Regulation is a compendium of ideas about regulation, with each author’s contribution relating to their area of expertise within the financial industry. All of the authors have real world experience, as well as academic ties. It’s fair to say that the authors are all conservative; least is best, small regulation people. All of them agree that regulations should be “Market based,” interfere with business as little as possible, and should be “cost effective.” Anything more might stifle innovation, hurt shareholder value, or even deny important services to consumers.

There are seventeen essays divided into six discrete areas from loss absorption, securities and derivatives, to consumer finance, and more. The final section pretty much brings it all together with an essay on Improving the Regulatory Process.

In any case, after the 1929 market crash, regulation, which had been a largely private endeavor, came to increasingly involve the government. The increase of regulation arguably provided a degree of stability until the 1970s when the new conservative ethos took over with regulations changing to favor, flexibility, innovation, and opportunity for the financial sector of the economy. As the regulations eased, the growth of the financial sector soared along with the variations on the theme of making money trading financial instruments, rather than just helping to make widgets. CDOs, Credit default swaps, Bitcoins? It’s been said that the crash of 2008 happened, in part, because nobody really understood what was going on with all these new products. One reaction to this failure was a new round of regulation. Another reaction was this book.

The authors are pretty much in agreement that regulations should only be done by people, like themselves, in the tranches (trenches) of the industry and that government regulators are apt to be stifling, heavy handed, and ignorant of Friedrich A. Hayek’s “knowledge of the particular circumstances of time and place.” This is best expressed by a paraphrase of the old ‘those that can’ canard. This one goes: “those that can, do; those who can’t, regulate.”

On the other hand, much of the writing is terrifically technical and a hard read for a layman. James M, Kilts, in the forward states that it is a good place for policy makers to start in crafting a new financial regulatory system. I’ll gladly leave it to them.