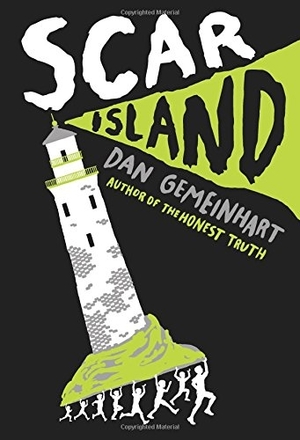 Gemeinhart’s Scar Island is a middle grade adventure and survival novel that includes coming to terms with the truth and dealing with guilt. Slabhenge Reformatory School for Troubled Boys is a dangerous place with an abusive Admiral in charge, demeaning work, unhealthy living conditions, and a mysterious door called the Hatch that is meant to keep something out. Jonathan Grisby is just another young criminal sentenced to spend time at Slabhenge where he can pay for his crime. However, when the Admiral and other authority figures die due to a lightning storm, Jonathan and the rest of the young accused criminals are left alone. They orchestrate a plan to stay on the island without having to go back home and deal with their crimes or have adult supervision. What should have been freedom brings a power struggle amongst the group while another storm brews.

The novel is told from third person point of view as Jonathan narrates his time at Slabhenge. The reader is immediately thrown into Jonathan’s journey on a boat to the island. Jonathan’s character development is well thought out and gives a satisfying ending to his internal conflict. His crime is hidden and he does not spend much time talking about his past, however there is some subtle hints as to what his crime was. Once he starts to trust some of the people on the island, you see bits of his backstory come together. He spends his time exploring and trying to handle each new problem that occurs now that the Admiral is gone.

The setting of a ruined fortress adds an eerie vibe to the survival story. The fortress and island confine as well as isolate the group, creating their own society with rules and leadership that causes problems for each person. Their physical environment shapes the continuing experiences at Slabhenge as past punishments repeat themselves. The story is very descriptive with some chapters having more description than dialogue.

The themes of guilt, trust, and truth are major aspects of this novel. The Admiral immediately demeans Jonathan and says he is evil. Other boys, such as Benny, use Jonathan’s crime against him to make Jonathan conform to Sebastian’s cruel rules and make the others not trust him. However, his friendship with another boy, Colin, helps him see through his guilt to the truth of his past. The ending still leaves unanswered questions to the boys’ journeys and the last problem the boys faced felt rushed compared to the rest of the survival story.

Scar Island is recommended for people who enjoy survival stories laced with adventure, mystery and the struggle over power with unresolved past conflicts driving the characters’ motivations. The novel has an intriguing survival premise and leads to a good read.